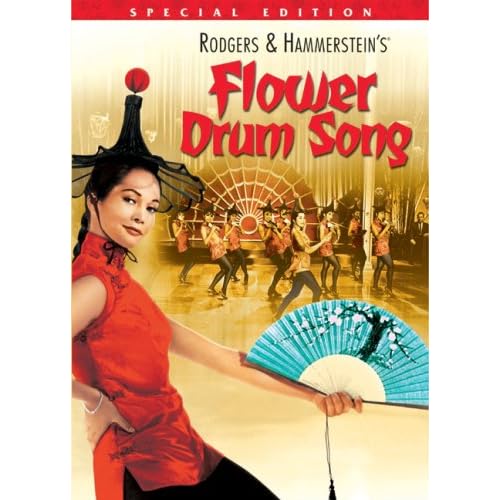 As fore mentioned, I have received several packages which I have poured some bit of economic currency into person enjoyment. One being the DVD release of Flower Drum Song.

Originally a novel by C.Y. Lee, Rogers and Hammerstein adapted the story into a Broadway Musical before it was finally made into a film. Set in the sprawling San Francisco Chinatown of the 1950s, the musical was a fascinating and beautiful story that really preserved a part of Hollywood history that, in this little girl's opinion, has yet to be surpassed (at least not by mainstream media).
The story of Flower Drum Song starts with Mei Li and her father Dr. Li being smuggled into America on a ship hiding in crates. As a picture bride and through an arranged marriage, they find Sammy Fong, her unwilling fiance. So, he passes them off to the Wang family, the center of our diverse conflicts of being Asian and being American. Mei Li is immediately taken with Wang Ta, the eldest boy. Although they connect, Ta is enamored with Linda Low, the lead performer at Sammy Fong's club (who she's been seeing for 5 years, but he's not committing). Love and romance, humor and joy, a wonderful story thus begins. A story about love, family, culture, and music.
That short description doesn't even begin to do the story justice! On with the mini analysis.
Despite being born decades after the release of the film, the authenticity of the experience mirroring the cultural clash and generation gap still rings in clarity. Flower Drum Song tells the story of Asian Americans as truly people of their time and, in my opinion, able to transcend time. Once people get past the backlash of the film on Asian American representation (not to mention some stereotypical roles for women), one can see the importance of this film as a tiny window into that particular time period; although still slightly glamorized by Hollywood (they never did explain what Master Wand did to end up being so wealthy). Where in the world would you be able to see Asian Americans of all walks singing, dancing, and loving on the big screen?
Miyoshi Umeki was so sweet as Mei Li (trivia: She was the first Asian to ever win an Academy Award for Best Supporting actress in Sayonara).
Nancy Kwan was gorgeous as Linda Low (she did the commentary too! So nice and gracious).
James Shigeta played Wang Ta; he's incredible charismatic and handsome (they don't make em like they used to ^_~. If only I was born a decade or two earlier...*fans self*...time only made him better *happy sigh*).
This was Jack Soo's first movie and I have to say, he was by far one of the best comedians ever. Elegance, deadpan, and incredibly expressionistic. I want all his films. All.
Benson Fong was hilarious as the father (despite him being rather young at the time).
Juanita Hall, of mixed black heritage, played the wonderful Auntie (I told people I was not crazy when I said I considered myself black. Color is color and white people are actually pink, so there!).
If you look carefully, you'll see a very young James Hong.
Honestly, this is one of my favorite movies. When I first saw it in college on the old thoroughly loved VHS, I knew I cannot wait for it to be on DVD. I didn't even know why I never saw it before! There were times when I had take a step back and remind myself of the time period the story was set it. Although modern, certain stereotypes were still hard to shake. At least there weren't the usually forbidden lovers, weak exotic women, or demure uber smart twits.
Rogers and Hammerstein as well as Joseph Fields tried to stay true to the characters. They were a lot more respectful to Asian Americans in their times, when Asians were basically sidelined and blacklisted due to yellowface and the yellow peril, even more so than Hollywood today. Yes, there are a lot more great Asian films today, but if we look at Asian American films- the good ones are far and few in between. Very often, the good films like Saving Face , Picture Bride, Undoing, and The Namesake (and many more) were made as independent films. Even the rather good Joy Luck Club film (Russel Wong- another gorgeous man that ages very well), although empowering to women (to a degree), was actually very unrealistic in their portrayal and continual stereotypes of Asian Americans-especially the men. Attractive hot men and just that, incredibly sexy people. If people can transcend borders, couldn't people do the same to stereotypes? Now I'm going off topic.
It's Asian Pacific American Month, I have to be a bit annoying with all the information *wink*.
The music and songs were very catchy and I find myself humming and singing along. The movie also gave me this urge to go dancing, take dance lessons and just break into song and dance. *grins* It's a happy romantic film full of humor with a twinge of educational value.
at 4:21 PM