I hope everyone had a wonderful three day weekend! Some nice BBQ, a couple of drinks, or just plain resting.

On Friday, I went out to a BBQ with friends in a place over 45minutes drive from my house. I brought my dog. We all stayed inside where there was AC until the very end of the evening. Nothing exciting happened, which was a testament of our advance aging in mentality. Or boredom. We spoke of really lame jokes, odd questions, and some politics. See? Old people. Heh.
(She really didn't want to take this picture)
In the beginning, we had some nice icy pina coladas. It wasn't really strong and we were mostly drinking for the ice. Some of the younger, well, the youngest two of the group make jello shots. Us old people tried it for the first time. It was freakin strong. Tears welled up and I had to down some water. Eesh.

The parental figures of the friends' house went out and cooked the hot dogs and hamburgers. There was food everywhere. Fireworks, I missed while trying to comfort my dogs. Since some of the neighbors decided to play with fireworks despite it being illegal. Oh well.

Saturday, was my hangout day with one of my oldest friend. She is now a Nalini Singh addict. Once again, I'm aging a lot faster than I should even with my extremely child-like looks (I say childlike rather than youthful due to the disturbing attentions I received in the past from really disturbed and sick men). We went shopping. Supposedly the fun kind, but although fun- we ditched to go to the supermarket and had a blast buying food. And I really wanted to shop for shoes! My red patent leather maryjanes. *sigh* Shoes. *ahem* Took my sister, who came back for the three day weekend, to hang out with her friends. They were really nice and I brought my dog again. Yes, we're seeing the dog pattern.
(You can see how irritated she was with me. She was so annoyed, but so cute! 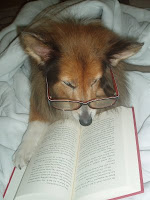 So, this is now my avatar. Hehehe.)
Today, had to drop off my sister so she can go back to the Bay. It's okay since I'll be visiting soon enough.

Things are a little dicey in my life at the moment so I may not be on as often as I would like (I should be able to read, but may not comment-using library internet when I can). Once things become a bit more settled (hopefully before SF), I'll be able to post all those back reviews I've been saving and editing and trying to add more information to.