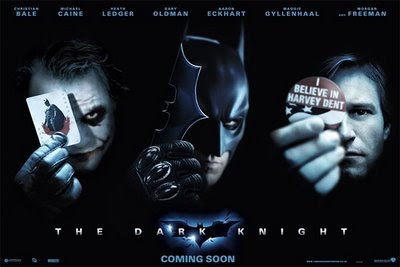 So, the first thing I've done in Northern California was watch this movie (with Amy ^_^ and her co-workers) and I must say, this is a good movie. As others have done wonderful (seriously awesome) reviews, I'll just do a mini one after thinking about the movie for most of the day. Character focus!
The movie was a wonderful retelling and revision of the Batman adventures. Much darker in tone and touches upon the deeper issues of humanity and society. This definitely gives hope to the the Batman franchise. Despite the exceeding amount of violence, there was a good balance between showing certain aspects as well as leaving enough off screen to disturb the audience. Humours aspects were speckled throughout the movie and I loved that. One of my favorite inclusion of the rather depressing and crazy story; the dark humor worked perfectly to highlight issues while injecting a bit of laughter. Otherwise, I'd be depressed for days.
Now, character breakdown.

Batman- Christian Bale reprised his role as Batman. It's a good touch lowering his voice when he's Batman opposed to this suave careless player role of Bruce Wayne. Even if the sound did bother me quite a lot in the beginning. By the time I got used to it, the movie ended. It also took away some of the emotions that may have colored the character more. Although Harvey Dent and Joker were supposed to contrast and project his internal conflicts, Bale may have needed more screen time to reveal more as Batman. In this sense, I miss seeing more of Batman himself. At the same time, the embodiment of the unbreakable, immovable pillar of Gotham was perfection when paired with Harvey and Joker. Batman, the one individual unable to fully reveal himself to anyone. No matter the circumstances, Bale kept the feeling of buried emotions where nothing can break him. Thus, fully contrasting him from the eventually broken Harvey Dent to the completely boundless Joker. The end was wonderful, to finally nail in the fact that Batman is not a hero. To survive the unbearably heavy burden of Gotham's darkness, Batman had to shed everything else and fully embody the granite Batman.
Harvey Dent- Aaron Eckhart did a wonderful job as the "what could have been" for Bruce Wayne. As the movie puts it, Harvey Dent was Gotham's "the White Knight." Eckhart pulled off the great slow demise of Harvey Dent. Stubborn, driven, but ultimately flawed. As he mirrored the same situations and problems Batman experienced, Harvey's inability to rise above the frailty of human nature paralleled that of Batman's reputation was wonderfully done by Eckhart. You can feel the pull of the character and would almost pity him, if not see how Batman (in all this frozen coldness) was able to survive.

The Joker- Just about everyone has agreed that Heath Ledger was the perfect Joker. I pretty much agree. After reading and watching Batman for all these years, Joker being one of the arch-nemesis for Batman, Ledger's portrayal was the Joker I have been seeing for years. The voice, the movements- psychotically brilliant and utterly fearless to just be. Completely uninhibited and absorbed in living to see the 'truth.' The complete opposite characteristics of Batman and Joker makes them the perfect individual. Everything the Joker had said and done, I was able to believe without a doubt. Not one moment did I stop to think it was an act. Not with the Joker. Nothing can top this. Not within the recent foreseeable future. To be truthful, Ledger as Joker only made my love for the character stronger. Yes, I admit it, I've had a childhood crush on the Joker (part of this love is due to Harley Quinn, but this will probably never develop) and Batman...simulaniously for years. Heh.
James Gordon- I always loved watching Gary Oldman. As Gordon, it was beautifully done. Emotional, compassionate, and wholly real. I loved watching him. He made me believe there was goodness in the world. Completely different from the former three, Oldman's Gordon was loving and just (or tries to be). Dedicated and determined, he was the only one able to not be fully crushed (as of yet) by the pressure of Gotham. Gordon was the true representation of hope, not Dent. As driven as he was, Gordon was also the one that would ultimately choose family, whereas Bruce chose Batman. Gordon was the middle ground Batman, Harvey Dent/Two Face, and Joker could not come close to achieving.
Lucius Fox- Morgan Freeman, another awesome actor I love watching. Able to portray any character exceedingly well, I love how Freeman's Lucius Fox not only assists Bruce, he was another character on par and equality with James Gordan. Sharp and very straight forward, Lucius was the one character completely devoted to his belief. Thus, the only true 'good guy' out of the movie. Uncompromising of his beliefs and trust in Bruce, he's also the only one that equally helps Bruce/Batman as well as stands up to him.
Alfred Pennyworth- Michael Caine also reprising his role. Perfect is the only word. Humorous and wise. If we all had an Alfred, life would be much more interesting. :D The only individual privy to the mind, feelings, and spirit of Bruce Wayne/Batman. Caine was able to give warmth to the movie as well as point out all what others were unable or unwilling to see. Probably one of the few 'complete' individuals that helped ground me while watching the movie.
Rachel Dawes -As much as I love Maggie Gyllenhaal and her as an actress, the character Rachel Dawes does nothing more than fit into the comic book cliques of romantic interests. An unnecessary character who's purpose was to make an emotional and visual impact to the males of the world. I had expected her conclusion in the first movie, but obviously, her situation was to make the final impact to darken the tone in the movie. In this sense, the reason why I've slowly pulled away from comic books and mainstream media hits closer to home. Her existence was for Batman/Bruce Wayne, Harvey Dent/Two Face, and the Joker. Even though the director, writers and actress tried to give Dawes a more realistic strength, it did not change the fact she would have been meaningless aside from the role give. Sorry, but I could barely feel for Rachel, not because of the acting (I love Gyallenhaal), but because of the role and character. (Here's a test; name me 5 strong female love interests without having them been put through unthinkable and insane trial by fire, and whose existence was not somehow determined due to the interactions of a hero.) 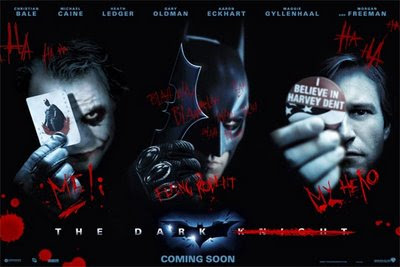 Comparison:
Batman and Joker, at the core are the same. They are the outcasts, driven to live their lives; giving the people of Gotham what they deserved. As Batman tries to protect people from the darkness, the Joker revels in exposing the 'true' darkness within people. Harvey Dent, the middle ground of choosing between light and dark not only split (figuratively and physically), it proved Joker's point of the facade of human civility.
Yet, as Joker proved human weakness by breaking Harvey Dent, Batman's immovability was the ultimate strength in difference between the ordinary and the true strength of humanity. As with the last 'test,' the civilians were unable to dirty their hands whereas the those whom lived in the darkest crevice of Gotham, hands bathed in blood, the convicts knew the price of taking a life would rather face death than break for a psychopath. Batman chose the harden himself and became stronger.

Conclusion:
All in all, I have no idea how the next movie would be. With Ledger gone, it would be hard to fill the role of Joker. With Joker having already made an appearance, all other villains pale in comparison to Joker's utter disregard to rules, structure, and life.
All the actors and actresses were great. The storyline, authentic and creative in its own right. I'm glad I watched it. Also overly violent at times, over 2 hours long (I seriously thought the movie ended 3 times before the movie actually ended), it was a great Batman movie.
Tomorrow: The week of RWA. Hehehe.
at 8:01 PM