The past two days have been completely exhausting. In a good way of course. And Katiebabs presents *wink*: 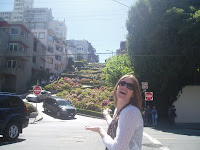 Tuesday: So I snuck out early in the morning to get on the 6AM BART. Clean up, ate some food, and got ready for a 5hr tour of San Francisco. 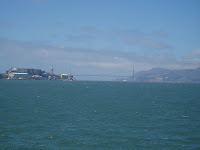 The tour was fun although our gu 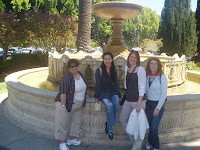 of...er... strict.
It was lots of fun. We saw many places, but didn't get to do much. We met up with Sula and LisaBea (and the Mr.) . First time meeting Wendy and Rosie; there's already plans for SoCal get togethers :D.
Tracy left *sniff sniff* and I left before Jane got there. They all partied afterwards. Hehehe.
Wednesday:
The one thing I'm sure everyone here has noticed about me is my lack of direction. I got lost in the morning trying to get to Denny's. Angie was sooooooooooo nice and bought all of us breakfast.
Then, we went to support Jane and Sarah for something that you may see on Friday. If you have cable. Hehehehe. Walking to the elevator from Rosie and co.'s apartment, I saw Gena Showalter and Jill Monroe. I screamed, hugged them both, and stood there like a ditz staring while Rosie spoke with them. >_<> 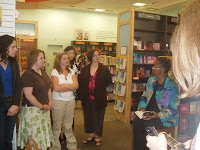 Walking to Borders, Amy was able to make it just in time to join and walk with us. While we were walking (yes, a lot of walking, did I mention I'm a SoCal girl? Not used to all the walking) to the bookstore, there was some confusion as to where we were going. Sarah flagged down a taxi (it was awesome, she rushed to the road and flagged them down; what a pro) then we all rushed into the minivan with two people sitting on others' laps. Angie and I became close. ;)
Once at Borders, I hid for a while until we need "body fillers." Seriously. Anyhow, as the lovely lady started reading, this little nagging feeling kept appearing and I realized it was Beverly Jenkins. Yes, she read a part of her new book and it has awesome. Ms. Jenkins was reading a wonderful part, but the interviewer wanted something hotter. Clearly, she's never read Beverly's books cuz...wooo, she cut at a great spot. *g*
I also met new people there (not going to list them for now) and we all walked back. 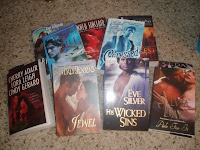 Then, Literacy Signing. Oh. My. Gosh. I walked and walked and 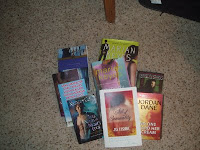 walked. Squeeled and screamed, and came close to tears a few times. There were so many authors I didn't get to go to due to time and fatigue. So many I walked by and couldn't stop. Other times, I just kept talking and rambling and babbling. And I kept forgetting to get pictures!!!! I'm such a ditz. And I would say stupid wrong things. >_<
Later, quite a few bloggers and others got together. Sula left :( halfway through. Otherwise, It was insane. I was surprised the people in the next room didn't come banging on our door. Or the hotel security kicking us out. It. Was. Crazy. I almost made a few calls/texts/emails to a few of you unable to make it, but you're all in different time zones and on a weekday. Didn't want to wake anyone(and no internet), but miss you!
My throat is completely sore from squeeling and screaming. I'm not even going to comment on the rest of my body. I met so many people and spoke to so many of them. Everyone was incredibly nice (I was able to miss the not-so-friendly ones).
I have so much more to say, but I need to catch the BART again. List of authors (and maybe a few pics) comes later.
xoxo
BTW: I met Nalini Singh, acted like an idiot, and forgot to take pictures. O_o
at 8:07 AM