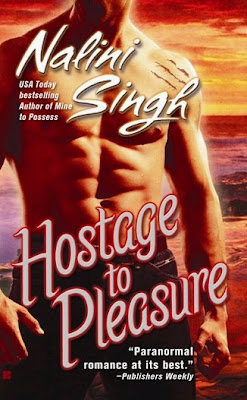 HOSTAGE TO PLEASURE, in stores September 2th!!!
Yes, soon my little pretty, you shall be within grasp! Oh, how much happiess can be contained within such a tiny little thing...oh yes~~~
Hostage to Pleasure

Buy this book. Just go out there and buy it. Buy it I say! ;) You will not regret it. This is one of the most surprising and wonderfully written stories ever.
When I got the book in the mail, it stayed with me…for days and nights. I held onto it and read every word over and over again. Over and over again…non-stop. I admit, I stayed up until about 3 A.M. on a Tuesday. Then read it at work. Then again that night…and so on and so forth (gimme that book, Ciara! Don’t take away my baby!). Hostage to Pleasure was one of the best books I have read. Nalini Singh does not disappoint. HtP was incredibly in depth and fleshed out. Full of surprises and turns that fits into the plot lines, but shows great respect to the readers’ intelligence.
We are already five books into the series and I can assure you, this book can be read out of order (although I have no idea why anyone would want to do such a thing) and still contain enough background without overwhelming new readers, or annoying long time followers.
Ashaya was another unique and strong individual-a great character. She was such a surprise, but as I’ve come to expect from Ms. Nalini- the women of these books do not disappoint. Strong and soft. Stubborn and compassionate. So…human. Flawed, but strives for better.
And Dorian. Oh Dorian. He was so real. I know I keep using this word throughout, but honestly, I don’t why I feel as if these characters exist. Their personalities, tragedies and actions progress in a manner that stays within character. Especially the women. If I could, I would want every male character in this book. And female. I’m not picky…and I’m open. *cough*
Dorian wasn’t some happy sap, but even in the worst situations, he still had this humor about him.
Once again, I don’t know how Ms. Nalini does this but it’s a testament of her skills as a writer that I can love the side characters whether they have a large role in the story arcs or not. Example: even though Dorian’s sister was gone, I actually fell so much in love her in this book that tears welled up towards the end of the book. And throughout. Great development, awesome characters, and everything was to die for.
I’m already foreseeing several copies because I’m going to run through them like no tomorrow.
Now, the only problem…there’s no release date for Branded by Fire!!!! I want it now! No, I need it more than the next batch of chocolately goodness after a long steamy day.
I’m slowly dying here. Very torturously slow, but as I’ve learned, Nalini Singh’s books are worth the wait. It will be worth every second…like great fore…shadowing. =P
at 3:55 PM