Oh, Silhouette Desires, how I've read you. With your extensively detailed titles and your rather formulaic style, I just can't seem to stop picking you up. Of course, every now and then, an author decides to punch you in the gut with some awesome greatness. Yes yes, that's bad grammar. :P
After falling in love with Ms. Nalini Singh's Psy/Changeling series, it's only necessary for me to get a hold of all her backlogs. In this case, when I found out Ms. Nalini wrote for Silhouette Desires, you might as well directly hook the chocolate to my veins...too bad that'll kill me (my sister insisted I put in the disclaimer - doctors ^_~).
Another thing that was even more fantastic, Ms. Nalini mentioned a manga version of Craving Beauty being published by Harlequin in Japanese. Manga- literally means comics in Japanese.
Seriously, hook the chocolate IV in me now. I don't care if it kills me. Just hook it in.
Being Ms. Nalini (my demi-goddess), I had received a copy while away at RWA. Books and friends (the very best ^_^) all week and coming home to more books and a new job. I musta done something good in my lifetimes to gain such karma.
Just so you know. Marc is in my hut on DIK Island. He was one of my first choices. This book is one of my six DIK books. I brought my pre-owned, dog ear beaten, always in my bag book with me to RWA and pestered Ms. Nalini to have it signed. I still carry this book to work, to the library, when I go shopping, and even when I'm out with friends going to a movie. This book is WITH me at all times. I love this book. I'm never without it. Never. Well, maybe when I'm swimming. Then it's just in my bag. Don't think I'm kidding because I'm being absolutely serious. One day, I'll take pictures of all the places I take this book. It stays.
After that lllllooooooooonnnnnnnnggggggggggggg forward, let us begin the review.
~~~ 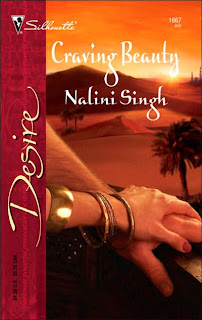 Craving Beauty by Nalini Singh - a comparative study of cross cultural translations and re-interpretations.
Or...Little Alys' love and obsession with great stories.
Hira's a beautiful woman. Drop dead, gorgeous beautiful and she knows it. BUT, unlike all villainous genius icy beauties as the usual foils in our mainstream romance (there's another one in here too), Hira felt her beauty was a curse. No one saw beyond her looks. "No one wanted to know Hira," as she had pointed out to our blockhead hero. Raised in Zulheil (no, it's not real *pouts*) with a dictator-like father, Hira knew her marriage would be a business deal.
Marc, a bayou brat who seriously clawed himself out of dirt-poor childhood (think Derek Craven-that good but not as dark), scarred physically and emotionally saw Hira one moonlight night and agreed to marry her the next rather than just do business as usual. Suffice to say, this was NOT the beginning of a loving marriage.
One thing I just LOVED about this book, they marry in the beginning. To see the couple work through a marriage; learning, growing and supporting each other. That's what I'd like to see. I don't want marriage to be a goal. Any dimwit can get married, but it takes true effort and love to make a marriage.
Hira and Marc were both equally hurt individuals thrown together with much misunderstandings, hurts, and love. From this early book, Ms. Nalini's wonderful writing and plotting abilities are clearly seen even in such a short book (my only complaint...too short, and abrupt ending). Also, this is a simple contemporary as there's a buzz and worry that this subgenre is not as it used to and may be fazed out. Even though Ms. Nalini did change genres, this book still gives me hope. *wink*
Both these characters were so different, yet driven with the same passion and thus equal. It's hard for me to fully write a review because let me just honestly say I'm gushing love. That's all. The core of the story was about these two characters. Their strengths and faults, maturing together and healing each other. Their happiness mattered to me and I truly felt they were real (I use this phrase in reference to Ms. Nalini's works often because it's true). Their past pains and sadness didn't disappear with one line understandings. Hira and Marc had to work at communicating and understanding each other and when they do, it's all double fudge brownies with marshmallow hot cocoa.
Slowly and sincerely. They still make mistakes and they still argue, but they learn to help the other achieve their dreams without sacrificing ones own. This book touches upon so many things I can personally relate to, feel, and understand. Of course, I say that with almost all Ms. Nalini's books, but for Craving Beauty, it's even more so.
As with all romances of that line, there was the 'other' woman, but I ignore that and focus on Hira and Marc. Teehee.

At the heart of all Ms. Nalini's writings are that, the heart. *happy sigh* 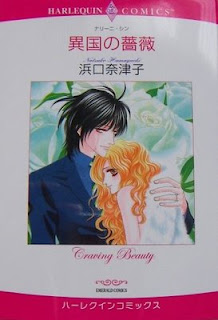 I enjoyed it. I honestly did, but I could completely see the Asian-Japanese influences in the manga. Somewhat toning down in the passion. Certain aspects changed to fit the more accepted cultural understandings. And of course, the sex was phased out. (How dare they!)
It's Harlequin mangas for goodness sakes, I've read Josei mangas. Yoshihara Yuki being one of my favorite mangakas, so seeing characters enjoying each other should have been in Craving Beauty. Alas, it was not.
The changes the artists and translators made were okay, but it dimmed the book from Need-Book-to-Live (original) to Somewhat-Enjoyable for me. Seriously, so much got cut and lost in the translations. Granted, my Japanese is MUCH weaker than it should have been, but I am still able to understand enough to miss reading the more hardcore essence of the original novel. Seriously, the storyline with little Bryan. Hira's mother's role. And what's with all that swimming? Give me Marc chopping wood please. Hmmm....
So, I thank Ms. Nalini for the manga (cuz it's still awesome), but I still prefer her original novel. Besides, I always saw Marc as more...primal (despite me not being into the primal type-I like the nerdy ones teehee). Much more primal and alpha in my head. Hira was much stronger and independent with that streak of inner fire in the original book too. The mangas toned it down. Yes, yes, I understand mangas quite a lot. I grew up with them for one and I was raised in similar cultures. I'll do a post on those someday. Far far away. ;)
I can rant on and on, but my point - Ms. Nalini Singh's books rule. Even when other's try to re-interpret, they fall short of her grand abilities. It's a must read and if you do have a chance, read the manga. Not bad, but the original Craving Beauty. Wooo la la. And no, you cannot borrow my copy right now. I'll be buying a second copy soon and then I'll lend that one out. ^_~
----
Before I go, I think I'm going to start something crazy that may just scare Ms. Nalini away from us forever. I want to propose a Ms. Nalini Singh day. A celebration of her wonderful works, the strong good effects of her books and the fact, without her, I wouldn't have met all of you as my friends. :) Which is the most important part of it all. *hugs*
at 9:58 PM