The ladies at ripmybodice's posts are always hilarious to read, but today, I saw a review that reminded me of how close romance novels resembles reality sometimes. Having already commented there, I cannot seem to get the full story out of my head. It would be better if I could cry it out, but I'm a little lacking in tears at the moment and would rather vent-so to speak.
This story was real and it happened to a tv personality. I didn't know them directly, but I knew people who did (it's a long complicated thing and not really pertaining to the actual story).
~~~

Bean* and Angel* met in Junior High school. Angel was a pretty, optimistic and well liked girl. Bean was the funny guy and well liked, but not popular in the sense Angel was. Being in the same home room one year (in these schools, students remained in the same classroom and the teachers switched for the different subjects), Bean and Angel became friends. The friendship continued into High School and their group of friends had realized there was a mutual feelings between Bean and Angel. 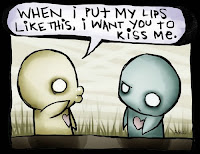 Bean wasn't a handsome guy by any standard. He wasn't even plain. Somewhat smart, but not brilliant, Bean didn't feel as if he had a chance with the beautiful and sweet Angel. It took him six months, with encouragement from friends, for Bean to finally ask Angel out. To his surprise, but to no one else's, Angel said yes and they were together ever since.
As with all relationships, there were ups and downs. Arguments and disagreements, but having been friends first and for so long, there were never mentions of breakups or even 'taking a break.' Bean and Angel loved each other. It was a love with the gentle foundation of childhood trust, the strong camaraderie of adolescence, and the unity of friendship and passion. They were family. Their families were families - so to speak. Their friends would switch between envy and teasing at the love Bean and Angel shared.
Yet, around the time Bean needed to go to mandatory army training (I forgot if it was before or after, since the training ranged from 1 1/2 years to 2 years depending on the drawing), Angel brutally broke up with Bean. Part of the discussion had been about the future and careers. Bean wanted to risk going into entertainment - in comedy too. Angel had supported him before, but this sudden change was a rude awakening for Bean. No matter what Bean did, Angel made sure the relationship was completely cut. It probably felt like ripping out his beating heart where the empty hollow hole left Bean with nothing more than his determination and dreams.
A year passed. Then two. Bean did go after his dreams and was starting to gain ground at a host on game shows and such.
He reconnected with a few friends, but didn't see Angel. Singing, food, and light drinking later, Bean remembered how great it had been for old youthful friendships. These relationships were rarely built as adults and even less in his chosen career.
Slowly getting in touch, a friend had suggested Bean contact Angel's family without giving much reason why. Instead, Bean was contacted by Angel's family. It wasn't until Bean actually called had Angel's sibling spoke the truth.
All those years ago, Angel had went to the doctors for a checkup. They had felt something was wrong and wanted more tests. Cancer was discovered and it was metastasizing. The most extreme chemo treatments were to be needed, but Angel prepared for the worst. Despite her family's objections to her decision and the few friends' (who found out) arguments, and persuasion, Angel broke up with Bean. To Angel, she didn't want Bean to be burdened by her. In the army, he would rarely get vacations and if he knew she was being hospitalized left and right, it would have made Bean suffer even more. Angel wanted him to go forward in his life. Not put everything on hold for her. To Angel, she wanted to keep the love they had and not wear down every last bit of his strength. She wanted to fight this disease herself. Or so her sibling had said. Towards the end, Angel went into a coma and never came back out.

To Bean, there was the possibility Angel knew how severe her condition was and made her decision to go. Bean was completely shocked. Completely. He had been completely mislead and was wrong in his self dialogue and assumptions that Angel no long loved him. All thrown out the window.
A few days later, he had wandered out after work to go for a midnight snack. Bean had walked by and saw a shop he and Angel had gone to before. Deciding on there, he was led to a small table, sat and ordered something. At that moment, the radio started playing a song so familiar his breath stopped and time stopped. Bean was sitting at the exact same table he had been with Angel all those years before with the exact same song singing all around. As if seeing Angel there smiling at him, Bean began to cried. Scared the other patrons and the shop owner, but he couldn't stop. Just kept crying and sobbing as his heart broke even more terribly than it had when Angel left him, washing out the tiny pieces of emptiness.
It took a really long time for Bean to come to grips with everything. He wanted to have been there, to love her and stay with her. To have done something instead of being left alone and to have her been alone. It took years, but Bean's okay now. Despite still feeling that Angel should have told him the truth and to at least have given him a chance to truly say goodbye, Bean has come to see what Angel did as love. Even though he wanted to be there (despite the fact he probably wouldn't have been allowed to), Bean has also come to appreciate that his memory of her wasn't when she's lost all her hair, her weight, and her suffering. Still would have wanted to be there though, but at least Bean knew he was loved.
~~~

If this were a romance novel, she would have survived. Or this would have been the back story to the main hero as something he must overcome to be with the heroine. Yet, this was real life. And it sucks. Even in romance novels, why would it usually be the women whom want to spare the men they love pain? I wanted to rewrite it, but I can't.** If I could, I would be smiling and crying at the same time.
Was Angel's action really love? Would this count as a type of happy ending? What is your take on this story? Love tragedy? Doomed love? Or one of those Great Love story?
----
*Disclaimer: All names have been changed for a) translation purposes and b) protection of identity.

** More Disclaimer: This is based on a true story, BUT was written mostly from memory from a few years back so I'm sure a few of the dates and situations probably didn't happen exactly the way it was written. The actual events happened nearly 17 years ago. Please also excuse my quick write. I would have loved to go all novel, but my skills still fall more in reporting. Besides, I just wanted to get this all out.
at 11:35 PM