I was hoping that with the start of this new year, I would be able to write at least once a week, but I guess that proverbial ship has already sailed. Lol. So, instead, I am hoping a more realistic goal is once a month.

I hope everyone is having a good month and not too overwhelmed by the weather these days. Even in this perpetual sunny coast, the shifting weather patterns have been very noticeable. The flowers bloom slightly off and the taste of food not quite right. Makes me wonder why there are so many people that live in denial of any global change…or even how they are able to blind themselves. Do they stop tasting the food they eat? Do they no longer feel the world around them? Or have they lost their ability to even smell the rich musky Earth or the cool misty Sky? Then again, if like me, they are pretty much living inside temperature controlled walls and only venture out into the “real” world for a few minutes a day, the tasteless food does seem rather real.

Still, I know we as humanity fear change so very much that choosing to be blind, deaf, and stupid is much too easy…but, seriously?

I am having a lot of internal debate and conflicts that are hopefully going to come to a resolution soon…if not resolution, as least some semi-ambivalent of conclusion.

Whether good or bad, we shall have to wait and see. Again, good and bad for whom and what…

Anyhow, ranting aside...I am hoping this ‘ear of the golden rabbit will be a better one than the past few. There are many books in my queue; I just need to buy them. Lol.

Now, to the funny story. Although my birthday has long past, I still think it’s a funny one to tell and hopefully cheer anyone up that may need it.

(My tiny cake and said dog in questions. Lol.) 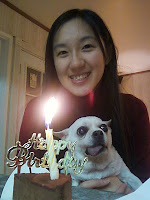 y*coughcough*. As young and as hip as I am, this whole slaving away daily for bread, water and shelter has a way of being overly draining. So, as my birthday came to pass and the few (very very very few) people that asked what I wanted for my birthday, I had one wish. Let me sleep. Let me sleep early, let me sleep late. More than anything, please let me sleep until I wake up naturally.

We all know where this was headed.

Since it was going to be my birthday (and the first one since my puppy passed away), I stole my sister’s dog from my parent’s room to spend the evening with me thinking “oh, it’ll be a nice thing.” Yea… 12:34AM… I jolted from my soundless sleep to the light and buzzing vibration of my phone. Yes, that right, my friends decided they wanted to wish me happy birthday. To be the first to wish me happy birthday and mindful that I might have been sleeping, sent me a text message. Ugh, can’t.txt.back… as I rolled over into my quilt and pillows away from the phone to somehow try to suffocate that flash of bright light now burned behind my eyelids. Heaved a sigh and tried to fall asleep…with much success.

And then, BAM! I literally jump and sat up at the same time as I heard a thunt sound and the cascade of other nearby objects. Grappled and fumbled (and accidentally wacked my hand on whatever it was in the dark) to open the splitting light at my bedside to find my sister's cute little dog had somehow fallen off the bed.

Given that he was old and small (and I had tons of junk around the bed), I freaked out (as one naturally would in any situation being ripped into wakefulness while in, what I assumed, was a nice dream) that the doggy was injured. He was just laying on the ground.

I quickly got up, called his name and tried to gingerly search him for injuries. He gave me a look that literally said, “wha?” Yea, whatever caused him to tumble off the bed and whatever injury he may have sustained meant nothing as he was so tired, he basically went back to sleep after he fell down.

Heart still pounding itself to early retirement, I quickly picked him up and laid him on the bed, continuing to check for injuries. He shuffled back and forth, so I put him back on the ground to see if maybe the injury would be visible if I made him (yes, I had to make him) walk around. All seemed fine as he walked over the water bowl and drank some water. I took him to take a quick bathroom break and everything still seemed to function fine, so as my heart refused to calm down, I brought him back to bed. He snuggled in the warmest center and went back to bed. I crawled in after.

A quick look at the time before I once again shut myself in darkness said it was 3ish. Oh joy… at least I get to sleep in, I thought to myself. Took a few deep semi-calming breaths and went back to sleep. I admit, it took a while longer.

“Wake up, wake up!” My door opened in its usual manner, as I tried to register what in this crazy would was going on. I didn’t even try to get up, but as the blurb got closer, it was to reveal to what appeared in my glassesless eyes, my mother. “Happy Birthday! You’re ­­*beep* years old. You’ve been born!”

“But I have your noodles!” Said my mother all proud of herself. “With an egg!”

For those of you that might not know, in certain people, instead of cake and presents, one gets to eat noodles and an egg for your birthday. Mom, being her, had thought it would be nice for us to eat birthday noodles for breakfast (she knew I had some plans later…much later), so she got up super early and made me noodles.

I dragged myself into a semi sitting position, pleading for more sleep, but alas, mother prevailed as she kept looking around to place my noodles on to get me to eat. After giving up, I shoved a few bites hot succulent noodles and finally convinced mom I’ll eat it later…soon later. She placed it on the little stand next to my bed before wishing me a happy birthday and letting me back to my nap.

Of course, by then, it wasn’t going to happen. I just kind of dozed trying to fall back asleep before finally giving up a while later.

The rest of the day was ok, not too eventful and not too uneventful. Bf came to pick me up. Had lunch with my friends I hadn’t seen in a really really long time. Some was a month, others nearly a year. Then dinner with bf and cake with family. Not too shabby.

With this, I hope you enjoyed reading about the odd universal adventures of lil ms a.

As for presents…hehehehe, I will hopefully post it this month, but I sent out some really interesting lists prior to my birthday. It’s just as funny. =D