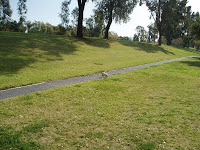 (The school where our little puppies used to roam)

Just recently, I made a decision: I want to be healthier. Yes, I’ve work hard on my little garden and I’ve become much more careful with what I eat (as well as where my food comes from), but that’s not enough. I wanted to start exercising more. Yes, yes, I’ve said this like a million little times, start working out only to give up a month later (usually due to monthly friend). Lately though, I’ve been doing pretty well since I kind of gave myself a little loophole.
Everyday, after work, I go out and walk. Even if it’s the mall, the bookstore, or even the library, I need to get my butt off any stationary surface and move.
Last Thursday, after pestering and nagging my mother to death, she agreed to go walking with me after dinner (mainly because she feared I would be snatched away and disappear into the fading light). It was actually a very pleasant experience. Slightly cold and windy, but the sky was dusky clear, the air crisply clean and mom behaved by not asking me questions I did not want to talk about. Well, she tried, but I said straight out we shouldn’t talk about it at that time. Instead, told her a lot of weird and crazy stuff. Reminisced about our doggies and how much we missed them. I’d like to do it again in the future…as long as my dear mother stays away from certain topics. Plus, I have to work hard to keep her from talking about certain topics.
Oh that is life.
In the meantime, I’ve been browsing the bookstore quite a lot, but due to the reading slump, I haven’t picked up anything lately which is really irritating as there are a lot of coupons and discounts going on right now.
at 8:58 AM