Princess of the Midnight Ball by Jessica Day George 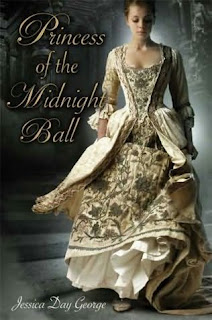 Princess of the Midnight Ball by Jessica Day George

Inspired by the story of the Twelve Dancing Princesses, Princess of the Midnight ball is not so much a retelling as an expansion of the tale – which I quite appreciated. Re-imaginings of fairytales are awesome, but it does throw me off sometimes when things get changed a little too dramatically. This story stayed pretty close to the original with only a few minor changes, but it only added to the story.

The basic tale was of a King with twelve beautiful daughters. Each morning when everyone awakened, there would be crumpled dresses and dancing shoes with holes littered on the Princesses’ bedroom floor as if they had been to a ball all night long. The King sent out an edict that anyone, rich or poor, prince or peasant shall be rewarded with the selection of any one of the Princess for a bride and inherit the throne and kingdom if he can discover where the Princesses go each night. If not discovered in three days, the man will lose his head. Many people tried one after the other and no one was able to succeed, all losing their lives until an old veteran soldier decided to try his luck.
Here was where one plot of the story diverges. Instead of an older war veteran, the hero of the tale is Galen, a young soldier returning to the kingdom after a long 12 years war. Rather than trying his luck, he meets the Princesses as a gardener and befriends them. Also, instead of happily dancing away, the Twelve Princesses were cursed to dance night after night until holes wore into the soles of their shoes. As one of the younger Princesses cried at the mention of a ball (even if it was just a fluffy toy one), they hate to dance. Merely cursed to do so. Galen, our beloved and genuinely kind hero wants nothing more than to help end it.

The writing was simplistic and did not have many detailed description, but it worked well to drive the story forward. The expansion on the background of why the Princesses must dance was a definite plus. The villain was a villain. The King was a doting and loving father, if not somewhat oblivious individual. You have the good religious representation and the counter-part corrupt religious personnel. The hero really was a hero at heart and I loved the fact he knew how to knit very well – which in turn had a rather important role in the story.

I very much enjoyed this book. It came at a time when so many plots for YA were either overly angst or complex dystopias. This was almost a throwback to the good days of reading fairytales (which I absolutely LURV). My only complaint was the end seemed a little rushed. I would have definitely enjoyed it more if they expanded some parts, or had more explanation of the backgrounds/worlds.
Then again, one of the Princesses in the story gets her own book that may or may not include more explanation. According to the blurb though, it seems to be a retelling of Cinderella.
Conclusion: Good read. Will re-read often. :) Thank you The Book Smugglers.
at 8:58 AM