Shanghai Girls and Dreams of Joy by Lisa See

Sorry to combine these two stories together into one very short review, but I had read them back to back (well, maybe a day or two apart) so the books were more of a single read for me than two separate stories. I’m going to try to be more honest and just come out with it. I didn’t like these books. So my quick and simple review below...

May and Pearl, two sisters living in Shanghai in the mid-1930s, are beautiful, sophisticated, and well-educated, but their family is on the verge of bankruptcy. Hoping to improve their social standing, May and Pearl’s parents arrange for their daughters to marry “Gold Mountain men” who have come from Los Angeles to find brides.

But when the sisters leave China and arrive at Angel’s Island (the Ellis Island of the West)--where they are detained, interrogated, and humiliated for months--they feel the harsh reality of leaving home. And when May discovers she’s pregnant the situation becomes even more desperate. The sisters make a pact that no one can ever know.

A novel about two sisters, two cultures, and the struggle to find a new life in America while bound to the old, Shanghai Girls is a fresh, fascinating adventure from beloved and bestselling author Lisa See. 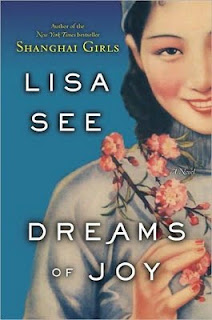 Dreams of Joy by Lisa See
~~~
Per Lisa See's website

In her beloved New York Times bestsellers Snow Flower and the Secret Fan, Peony in Love, and, most recently, Shanghai Girls, Lisa See has brilliantly illuminated the potent bonds of mother love, romantic love, and love of country. Now, in DREAMS OF JOY, she returns to these timeless themes, continuing the story of sisters Pearl and May from Shanghai Girls, and Pearl’s strong-willed nineteen-year-old daughter, Joy.

Reeling from newly uncovered family secrets, and anger at her mother and aunt for keeping them from her, Joy runs away to Shanghai in early 1957 to find her birth father—the artist Z.G. Li, with whom both May and Pearl were once in love. Dazzled by him, and blinded by idealism and defiance, Joy throws herself into the New Society of Red China, heedless of the dangers in the communist regime and the Great Leap Forward.

Devastated by Joy’s flight and terrified for her safety, Pearl is determined to save her daughter, no matter the personal cost. From the crowded city to remote villages, Pearl confronts old demons and almost insurmountable challenges as she follows Joy, hoping for reconciliation. Yet even as Joy’s and Pearl’s separate journeys converge, one of the most tragic episodes in China’s history threatens their very lives.

Acclaimed for her richly drawn characters and vivid storytelling, Lisa See once again renders a family challenged by tragedy and time, yet ultimately united by the resilience of love.

Shanghai Girls was the first half of the story of two sisters, Pearl and May. They were married off at a young age in an arranged marriage even though both were in love with someone else (the same person). As war draws near, the sisters struggle through China to escape to America in hopes of a better future. Instead, they encounter discrimination and hardship, often caught between worlds. This was a book of struggle and conflict of/between the two sisters, the supposed obedient Pearl and the rebellious May. Their love for each other also hid the problems that led to their own unhappiness and poor decisions.

Dreams of Joy continued with the journey of Pearl and May, but has a great focus on their daughter Joy. At the end of Shanghai Girls, Joy discovered that although raised by Pearl and her husband, Sam, Joy was actually the daughter of May and the man both sisters loved. So, in a moment of defiance and naïve idealism of Communism, the Chinese American Joy left to look for her birth father and the supposed idealism of communist China and landed herself into yet another time of great cultural change and historical upheaval. As interesting as the characters were coupled with the intensity of the conflicts and the dynamic historical settings, I couldn’t get into either book.

First, let me say I am a fan of Lisa See’s books, especially after Snow Flower and the Secret Fan. When I read the blurb for Shanghai Girls, I was so excited, this book was so calling me with its history and depths of sisterly love/anguish. Then I read it. Let me also say this - I was probably so disappointed because I had too high of expectations, but I admit that my biggest problem with this book was I could not connect with a single character or their struggles fully. Even Dreams of Joy, a Chinese American girl trying to look for her roots? It should have pulled me in right away, but it was such a struggle to finish. There were moments where I was complete absorbed, but quicker than an alligator, something would happen that snapped me right out of the moment and I always ended up frowning thinking, "Really? Are you kidding me?"

Shanghai Girls literally left off at a very bleak cliffhanger where I really just wanted to slap every character in there. I mean, really? Really? I almost wanted to throw the book at the wall, but instead just started at it in complete annoyed confusion. I had hoped the second novel would be more satisfying. Instead, I read Dreams of Joy and I still wanted to slap them even more. And sadly, I completely did not buy that happy ending. It almost felt as if the author was trying to have Dream of Joy make up for the end at Shanghai Girls.

*spoiler alert*
*spoiler alert*
First book: Basically, we have a suicide for one of the only person I actually liked (Sam) because these two supposedly loving sisters don't know what it means to talk to each other. Then you have an overly privileged Chinese American brat running away to China.

Second book: After all the above, in the second book - after some rather horrific realities and problems...we then have everyone, and I mean just about EVERYONE escape and be rescued. They all get happily ever afters? Really? Are you kidding me? After all that, they'll really be ok? I know what happened historically and very very rarely do families all get to escape. Not to mention to escape, there was a whole lot worse things going on. *sigh*

Don't get me wrong. This book had good parts-great parts in fact. With this author, you can never go wrong with the writings. The historical background was great and as with all Lisa See books. The research and detail was incredible. Filled with gritty details and emotional rollercoaster, it should have been awesome for me to read. Even each character should have been completely my type of stories to read. I really wanted to like both books. In the end, even though I liked the world and the story overall (the idea of love between sisters, miscommunication, and being true to oneself) this was not my book. I hate to write this but it was because of some TSTL. *sigh* It’s almost as if anytime the characters needed to be put into really dangerous situations, it was all due to some TSTL decisions. Like…seriously. In both books. *shakes head*

Conclusion: I’m still glad I read it if only for the fact it was Lisa See, but would not re-read anytime soon.
at 8:58 AM