Book of a Thousand Days by Shannon Hale 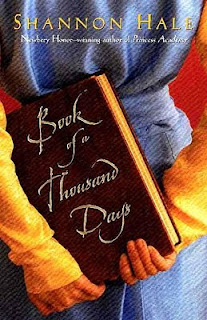 Book of a Thousand Days by Shannon Hale

This was yet another book bought on a whim that turned out to be rather awesome (oh how random browsing at a bookstore comes away with unexpected surprises). Heck, I had not even read Shannon Hale until I picked up this gem. A diary writing Mongolian girl trapped in a tower? Who does not want to read something like this? It was so different from the “norm” of young novels out there, even when we account into the diverse cultural books that have popped up everywhere. Then I found out this was based on an older folklore? Heck yes, let me read.

So how to begin this review? I’m a little stumped…hmmm… Let’s just jump in with the basic.

Dashti, a mucker girl as she called herself, was our main character and voice throughout the journey. Dashti was the maid to Lady Saren and the two were sealed in the tower together because Lady Saren refused an arranged marriage.

Lady Saren, a year younger than Dashti, refused to go into an arranged marriage with a Lord Khasar. Instead as a child, she had written letters with a young Lord Tegus and they had half written they might marry as adults.

Lord Khasar, our villain, had ruthlessly driven through one nation after another, took everything in sight and left destruction in his wake. He wanted to marry Saren for some twisted reasons.

Kahn Tegus, our hero, was rather perfect but slightly one dimensional. Tegus was a noble and compassionate young man. When he heard about what happened to Saren, he did attempt to go help, but it all came to naught.

The first half of the story occurred while both Dashti and Saren were much younger and trapped in the tower. The way they lived together, trying to survive day after day. This was also the bulk were the readers learn of their world, based on our Mongolia. The author put in a good amount of research as the world and culture felt pretty authentic.

In the second half of the story, Dashti was able to get the two of them out of the tower only to find the land devastated and barren. Dashti took Saren to seek safety on Tegus’ land as his was one of the few tribes left that had not been destroyed yet. Once there, we learn they were one the verge of war. Lord Khasar was moving towards Tegus’ land. At Saren’s request, they kept their identities hidden and they tried to survive as servants. It was during the second half we finally learned why Saren was so fearful and the source of Lord Khasar’s powers. There was a touch of magic towards the end that was not entirely out of place. Just a tad. Even so, the ideas were well ingrained into the culture of the world.

Part coming of age, part mystery, part romance and all survival, this was an interesting and beautiful book. I did not completely change my hesitancy for first person narratives, but it gave me a new appreciation for it. This also reminded me a little of the oral stories I used to often read/hear. Fairytales, folklores and stories for younger children have great abilities to weave lessons of history, culture and humanity together. This was no different.

I am much in love with Shannon Hale after this book. Probably will be buying more soon. Lol.
at 8:58 AM