Day One: Blaze of Memory 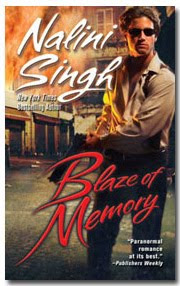 Welcome to my Nalini Singh week. This has been over a month in the making as I started this right after Kiss of Snow. I will finish up the series quickie review mode until Friday where the bulk of my analysis on KoS will come out. Most of this week will be me insanely gushing and saying what I love about each book. Let me start where I left off… Blaze of Memory.

Blaze of Memory by Nalini Singh

This novel took me by complete surprise and it was good. In this novel, we were introduced to the intricacies of the world of The Forgottens – descendants of the original Psy rebels. Dev Santos, current board leader of The Shine Foundation (an organization that connected and protected those of the Forgottens) walked out of his home to find an unconscious half starved beaten woman on his doorstep. It was Ekaterina, a Psy scientist that worked with Ashaya from previous books. She was presumed dead during the lab explosion, but had actually been kidnapped and tortured by Counselor Ming. The fact the main lead was Katya was a testament of how Ms. Nalini’s ability to surprise the reader (in the best way possible). Talk about reviving a character from the dead, although I’m sure Ms. Nalini had it all planned out. :)

As Katya had her mind torn into and completely tortured out, she had to re-develop herself and her abilities. This allowed for more information about the Psy without ever feeling like everything was just dumped on the reader. Katya was such a strong character in one of the gentlest ways, how else would she have survived the way she did. She was surprisingly sweet, but also packed a punch when needed to. I loved how she did not let anything or anyone keep her down. Not even Dev.

Dev was an interesting character: dark and tortured, and completely aware of it. He’s the epitome of the tortured alpha male. As with all Ms. Nalini’s heroes, he still had the incredibly strong streak of protectiveness and general mushiness. I enjoyed how Dev also brought to light some of the problems humans (the Forgottens, really) faced as well as the toll of being a leader. His abilities were also a good change from what we knew about Psy abilities. It was also fascinating to see the Forgotten’s own system and the problems they encountered.

Katya and Dev completed each other in a way that was hard to explain. They were both strong and weak in different aspects and together, they were able to hold each other up. Dev’s past was rather devastatingly sad, but at the same time, he was so very protective and strong. Katya was all alone in the world, broken and hurt, but she was stronger than even she imagined. Together, they made yet another perfect couple.

The basic storyline was also much more focused, although I am noticing Ms. Nalini’s trend of several storylines wrapped up in one: frictions within the Shine Foundation, Katya’s instinctive drive to go North, changing powers of Forgottens, and the newly found child of Forgottens. Even so, the main focus was about Katya and Dev’s relationship. Both their inability to trust Katya because Ming had done something to her mind was a very intense conflict, but Dev’s devotion to Katya even knowing the dangers was all the sweeter for this book. Their attraction was almost tangible and leapt off the pages.

Favorite part: Dev was thinking and woke Katya up, she sleepily told him to stop broadcasting.

A few hiccups:
The whole storyline about the chase North was a bit anticlimactic. It was important that Katya had a mission and whatnot, and it also revealed more of the breaking down of Silence, but it was rather distracting at times. I figured it would be a card for future usage, but it kinda of never came up again. There were a few other things that kind of made me pause, but did not take away from the enjoyment of the story.

The jumping back and forth between all the different information was distracting. Main storylines aside, the extra information of the letters from the past as coupled with the Earthtwo Logs were all interplaced. I ended up just reading them all separate to keep things more clear.

Overall, I found this book to be another great story to the Psy/Changeling series.
at 8:58 AM