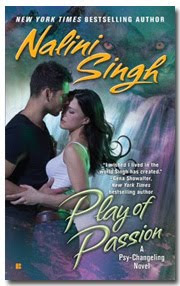 It's Day 3! Happy Mid-Week! I hope everyone is surviving. I'm pretty sure I'm not, but oh well. What can I do. Oh yea, read. Hehehe.

Play of Passion by Nalini Singh

Indigo and Drew, oh Indigo and Drew. I was soooo unsure how this was story was going to work out and I don’t know why I ever worried? First off, I heart Indigo and Drew like no tomorrow. An ass-kicking, no-nonsense female lieutenant Indigo? The awesome funny, observant and loving sweetheart Andrew? Talk about a change of pace for the romance novels around. I loved it! I was very excited to know Indigo and Andrew were going to be mates. It was also interesting to see what Drew really did for the pack. This was also our first older woman-younger man story (which I’m not usually into, but this was Ms. Nalini writing) and it was great. I loved how all these conflicts came into play.

Indigo had tied with Mercy as two of my favorite characters. Both strong women on equal ground and were high level surrounded by males. They were very high up on the hierarchy and had to be strong. At the same time, both were very feminine in their own way. I love strong female characters. We don’t have enough of those in books anywhere. Although Indigo had her overly stubborn moments, she was not the usual annoyingly headstrong type. Instead, she was much more balanced, willing to admit wrongs plus learn and adapt to be with Drew. That makes her an incredible character. Smart, sassy, and so funny in a snarky way at times I just couldn’t help but laugh out loud. And the slow relationship with Drew, it was darn sexy.

Drew was also one of my favorite. I know so many people that drool over those alpha males, but I’m always more into the types that had a sense of humor to them. Which meant they were usually beta. Drew was a great balance of both. He had quite a lot of alpha qualities, but also this funny ease about him that I adored. I also loved how Ms. Nalini also pointed this aspect of his personality out. Even though Drew was the tracker (ergo, very strong and powerful), he did not let near-death, loss of family, and all those other usual “reasons” get him down. And cute little Platty? Major awwwwww… I prefer heroes like Drew…wish there were more. :)

I have my reservations about some aspects of this book, but those were just minor things easily resolved/overlooked. Ex: This hierarchy thing...eh... Drew gets shot again...eh... Sienna steals the scene...nice. Hahaha.

Both Drew and Indigo were freaking stubborn and it was both a good and bad thing. Their solid playful yet tender relationship was a great one indeed. I have a huge soft spot for people that have known each other when they’re young, grow up and realized they were in love. It’s sweet (and probably one I had secretly longed for – it’s ok, I got the old guy). And the smex scenes…woooo *fans self to cool down*.

Even with all the series moments, I felt this was a more light-hearted book, if only because it was Drew. Heart funny guys.