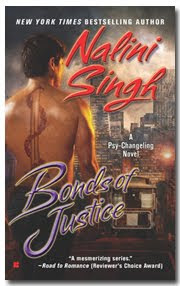 Welcome to day 2 of my insanity. Don't worry...it's a short one. Long review will be at the end. Be afraid, be very afraid.

Fyi: All my reviews will have spoilers.

Bonds of Justice by Nalini Singh

Again, this book took me by surprise. One, I did not expect a book to be written about for Max so soon, nor did I expect it to be so darn good. Ms. Nalini…one of the genius writers around. A balanced blend of characters and storyline – this was an exceptional read. First, we have Sophia Russo, the Justice Psy. She was assigned to help get into the minds of a serial killer for the locations of the women he tortured and killed. Second, Counselor Nikita decided to hire Sophia and Max to discover and stop whoever had been killing her people. Now assigned together on two cases, Sophia and Max began their odd and intense relationship together, all the while, the threat of rehabilitation loomed for Sophie. I couldn’t help it, I’m just all up in this book. The two characters together really burned up the pages. :D
The triple storyline would have been too much, but they were done so well.

Sophia was another fascinating and awesome character. Strong, damaged, realistic and smart. Ms. Nalini sure writes very realistic women, equally damaged and strong – powerful, yet vulnerable. The one moment I knew I loved Sophie was when she spoke of her past…that she’ll never forget the three other children that were destroyed by the world Silence had created, it was so quietly powerful.

Max was the breath of air Sophia needed. With his natural mental shields, Max was literally a physical link and haven for Sophia’s nearly broken shields. Max, max, max. He was awesome. I really loved his character. Strong, sweet and somehow so unassuming. I loved how he was considered the “pretty” one and so many women kept hitting on him. Also, his interaction with his cat was hilarious. Made me love cats more even though I’m a dog person. Hehehe.

The relationship between Sophia and Max was great. They complemented each other so well it was incredibly moving. Whenever they were together, the pages would have burned up. Especially the little notes/letters they passed to each other that start off each new chapter. I loved those so much. It was just too sexy and cute at the same time. They teased and tormented each other, but at the same time gave unconditional support. The end was lovely too.

The only thing that felt slightly out of place was River. It felt a little too rushed at the end. Everything else…perfect. All the storylines interconnected so well it blew my mind away.

Least Favorite: Don’t know because I wiped it from my mind. Hahaha.

Conclusion: Awesome
at 8:58 AM