Innocent in the Sheikh’s Harem by Marguerite Kaye 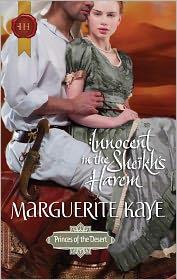 Innocent in the Sheikh’s Harem by Marguerite Kaye

I blame you. First you addict me to Maggie Osborne and westerns after she already retired. Then, you continually feed loving books to my local library (and the RWA was brilliant enough to recognize your awesomeness). I’m utterly spoiled by you enough as it is, and now this? This…re-obsession to category romances? Why, SuperLibrarian, why must you write that cool review?

After years of traumatization by the Westerns/Sheikh series of some authors *coughdianapalmercough*, I finally got away from certain/most category romances. Years of teasing by friends may have also dissuaded me some from obsessively buying every month all the Harlequin/Silhouette series, but I was getting better! I read only occasionally and was very selective. I know longer stared at the monthly stands at the bookstore deciding which series/category to buy. Everything was under control. The overly…er…simple social world of romance (i.e. ideologies) were getting annoying. Many stories were papercut copies. I was never into the sheikhs anyways, so it was easy to let go. Plus, the smex scenes weren’t cutting it with all those semi-fade to black and flowery insanity. Eheheheeack *chokes on cackle*

Then, here you were, writing your wonderful reviews…brainwashing me with such good books that called out to me…over and over until I finally caved and was unable to resist any longer… I bought Innocent in the Sheikh’s Harem. And my goodness were your right in your assessments of said book. I’d write the author, but I blame you so you get my letter/review. That’s what you get for being my favorite Librarian. I’ve fallen back on the wagon (not that I was ever off, but I was better!) and have gone back the ways of ignorant virgin heroines and powerful borderline-ass heroes. Oh secret obsession, I’m back.

Super Librarian, you were right. Don’t you just love hearing that? :) This was one of the better books I’ve read in a while. I would even graduate it from category romance, but then that would make it seem as if category romance was lesser – which it’s NOT. Category romance rocks! So, let me throw some confetti and let’s celebrate. *throws two handful of sugar confetti up into the air* *grabbed some more, stares at tiny hand clutched around sugary goodness and hesitates* *stuffs mouth with sugar* Nommummmumm.

*ahem* Onto the review…

Let me just say, the book was very good. It was everything you had mentioned and more. This was one of the more culturally and socially balanced stories I’ve read in a real long while, much less a Harlequin/Silhouette (well, western romance in general). There were still some of the basic troupes: virgin widow and all that encompassed (one of my fav.), a high powered man (sheikh, businessman – more meh for me), Western culture educated, the exoticification of the orient as more seductive and open, etc. etc. On top of that, we must have the big misunderstanding. But this book did it all better. Heh.

The story stayed true to the time period to a certain extent and although in an alternate world, the information felt true.

Lady Celia – daughter of diplomat (ergo, Papa encouraged her to have more of a brain), oldest of five girls, Celia was in an arranged marriage with George, her Papa’s Protégé. While on travel to A’Qadiz (the author likened it to Arabia), George was killed running away from a fight. Celia was shown to be very pragmatic and with a cool head upon her shoulders. Even though the constant reiteration that Celia had the mind of a man was grating to the feminist in me, I do appreciate it stayed true to the time. In the past, it was a compliment to have the mind of man since men were supposedly superior so I let it pass.

Celia was a little too balanced in my opinion, but I really loved how she was a character that was willing to admit the truth to herself as well as apologize for her mistakes. She’s not only smart, but there were no TSTL decisions or moments. Celia was sincere and truthful, a very strong woman with such a streak of common sense it was incredibly fun to read. I found it a bit odd for them to feel that it was normal for women to be educated though. It was actually uncommon at the time. Being headstrong and speaking one’s mind for women was not only frowned upon, but would have gotten said woman in a lot of trouble. Aside from that minor thing, I very much enjoyed Celia.

Ramiz of A’Qadiz was actually the younger son. He became Prince when his older brother was killed. The guy had to be European educated and wanting to “modernize” his culture, but that was where the similarities to common sheikh stories end. Ramiz was a modern man that was sincerely very respectful to the old ways and cultures he was raised – which was freaking refreshing for once. None of that constant criticism saying one culture was better…only that change was necessary and the importance of peace (I love an alpha male like that). One thing I did enjoy about this whole virgin trope, was the type of value placed on it by the hero. Rather fear a virgin as one would a leper, the way it was tied with the idea of honor as part of the culture…well, it was just refreshing to read. I would like to point out the Ramiz did border on almost being too much of an A-hole, bomb-like temper and all around muleheadness. The author was good at pulling back just in time that he wasn’t completely unlikable.

I very much focused on the romance between these two characters. The conflicts felt very real as to why the two was able to be together and it kept me guessing how it would be resolved. It was not some flimsy, “I’m not good enough for you” or “evil woman between us” or the usual blah blah blah excuses. There were actual social and political reasons that were very grounded and very realistic. At the same time, I found that I was able to believe in the HEA for these two characters. The author was very good at showing how the two characters were very similar in their own ways. Even Ramiz commented on it several times and I enjoyed seeing a bit of role reversal where Celia was the more level headed one.

As for the intimate scenes…wow. I must have stayed away from these books for much too long because there was quite a lot of sexual tension and increasing smex acts. Most was done quite well. A few scenes were kind of funny to read and I raised my tiny brows at a few others.
There were some over-the-top scenes, but that was expected. Even so, the big Misunderstanding was very interestingly done. Again, no TSTL decisions, no life-and-death in the balance to make the characters realize their love (they were smart enough to do it on there own!), and resolution felt true to character. Overall, this was a very good book. I re-read it a few times already and am really debating if I should get sucked back into these type of brain candy… It’s rather good. And I am rather looking forward to the next installment.

Thank you, Super Librarian. You really are my favorite Librarian (plus all the ones from school… >_<).

P.S. Now someone please give me recommendations for virgin heroines and decent heroes!
at 8:58 AM