Oh disappointment, your name should really be called expectation. If I could eradicate this uncooperative, whatyoucallit – emotion, I totally would because you kill books. Yes, you, expectation…you cause your evil twin like Jackal and Hyde, disappointment, to jerk the rug from under me and destroy any chances of enjoyment on books that were universally loved.
Kate Noble – her books were very well received around the blogsphere and I was totally tempted by the glorious reviews. Oh, darn you high expectation!
Expectation totally ruined my enjoyment of Follow My Lead. *sigh* 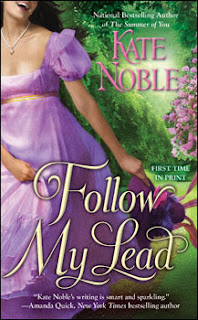 realistic characters, the lovely road romance, the incredible interactions…I couldn’t get into it! Why?!!!! I so wanted to love this book, but it bordered on “ok.” At least for now. It made me really sad since every review I’ve read praised the books authenticity and originality. The book had all the elements I would normally enjoy, but *sigh*. I liked the heroine. Winn was awesome, so straight-forward and strong. I liked the hero too. Jason was so…practical. The culture, the world in the book pretty authentic. I loved journey romances. The conflict was different and interesting. There were no mystical help or magical resolution. The two characters actually got to know each other first with the entire emphasis on their relationship. At times, I was totally involved in the story when something I cannot pinpoint kept prodding me at the back of my mind. I don’t know what happened, but I put the book down with quite a lot of disappointment. Was it just me?

It wasn’t until I read Revealed that the problem revealed itself. I had too much expectation for Follow My Lead to rock my world as it had for so many other people. I wanted Follow My Lead to be as revolutionary as the reviews had claimed. And when it didn’t, I was much disappointed. It was pleasant, mind you. I can tell the writing and research put into Follow My Lead was very extensive. The dialogue was humorous, but mostly due to the expectations, the book ended up not working for me. I ended up not connecting with the characters as much and felt the “villain” storyline, George was kind of weak. Overall a good book, but somehow not my thing.
As it were, I had purchased Revealed and figured I’d give that one a try. Conclusion? So glad I kept reading Kate Noble books. Revealed was just lovely. I began to slowly see why so many people enjoyed Kate Noble’s books. The characters were, again, realistic and all very different from each other. Each character was unique in their own ways, with specific hobbies and personalities. I have yet to see any cookie cutter characters. 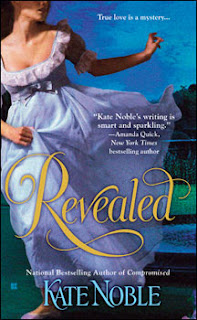 normal regency novels and circumstances, Penelope would have been considered one of those anti-heroine females that competed with the sweet gentle self-unaware heroine. Penelope was the smart beautiful widow that knew how to use her charms as well as social standing to get her way. Then there was Marcus, our hero. I loved that the man really had no connects and was a simple guy. Yes, there were some covert affair kind of stuff, but he’s not some superspy. Not some secret noble born or master-of-the-world kind of guy. Not even a businessman. It was great! As the started to become friends and fall in love…it was so beautiful. Their own hidden language… “It’s just me” especially when they were together the first time. Oh, if I could swoon, I would. Just let me swoon. I loved how Kate Noble was able to go beyond the standard regency settings.

The one complaint I had with the book was towards the end, when the big reveal came for the secret. I don’t know why, but it felt kind of blown out of proportions (maybe?). Even though Marcus used it drive Penelope away as means to protect her (which I never liked characters doing to each other), the whole situation felt too forced. It felt wrong right after such a sweet scene and the way Penelope reacted, although sort of in character, also felt incomplete somehow. I did love how it was our heroine that came up to scratch and confronted Marcus at the end. Girl power all the way. ;) After that, I had to pick up the only other book of Kate Noble’s I had, Summer of You. 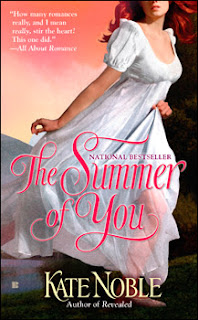 When I read Summer of You, I fell head over heals in love. I saw both characters already in the previous books and that probably gave me a good inclination of their HEA, but reading how they fell in love was just too sweet. By themselves, Lady Jane Cummings and Byrne Worth were incomplete. They literally felt incomplete they showed up in the book separately. Yet from the very beginning, the moment they were together on the same pages, everything fell into place. The scenes finally fitted together, which was probably the point – they were two halves of a whole. I just loved reading them together. Their interactions, the way their relationship developed. It was just so sweet and tender. It was not some random fated occurrence…no, Jane and Bryne slowly became friends and then moved onto something more. As both were trying to escape and hide from the world, they found each other instead. They teased and joked, cared for and challenged each other. This was one of the sweetest relationships I’ve read in a while. It was so wonderful I read it a few more times. Right after. Lol.

I also loved how Summer of You touched up on the subject of Alzheimer for the Duke, Jane and Jason’s father. It was equally heart-wrenching and sweet. I’m always amazed at how certain diseases or problems rarely appeared in historical novels given the historical context (like my rants about sexually transmitted diseases). So kudos for Kate Noble. I was kind of sad I didn’t get to see Marcus or Penelope. Also, as much as I enjoyed the secondary romance, I would have liked it all more the storyline was more focused on Jane and Bryne. Also, Jason…I’m sure it was because I read the books in all the wrong order, but it screwed up my head in terms of Jason as a character. Although I enjoyed seeing how much he had changed from Summer of You to Follow My Lead, it took more away from the book than added to it.

Jason in Summer of You felt too much of a set-up for Follow My Lead and that was a little irritating. Even at the end, right before the Epilogue, we saw things through Jason’s point of view. Sweet, but I wanted more of Jane and Bryne! Lol. Which leads me to another point: the endings in these books always felt so abrupt. In all three books, once the main characters have acknowledged their love and devotions, it was over. The mini Epilogues were a small extension for the resolutions and to show HEA, but didn’t felt right for me. I’d just prefer a little more, I guess.

All in all, the reviews out there were correct: Kate Noble was awesome. Be warned, Kate Noble…you’ve moving up on my list of authors I wait for (i.e. stalk). ;)
at 8:58 AM