His At Night by Sherry Thomas 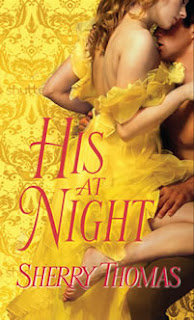 His at Night by Sherry Thomas

I admit, I heard about Sherry Thomas when she was first published. Despite all the praises I’d heard, I stayed quietly in the background like some demon fiend biding my time for a storyline that I look for and it came (yes yes, perverted pun intended). This was my first Sherry Thomas novel and I am definitely curious of all her books now. I heard great things about her, but a girl has to protect her wallet.

His at Night contained some basic historical stories: compromising situation let to marriage, woman in horrible situation, mystery and murder. What separated this book from others were the very interesting characters and the twist in the usual elements. Two people pretending to be someone they were not. It was awesome part. Also, the fact that we have the heroine as the one that did the compromising to ensure they married? Awesome. Such a twist. Normally, I would have hated the idea of those scheming women trying to land a man. Those were usually the villains in a romance novel. In Sherry Thomas’ astounding hands, this twist was mind-blowing.

Elissande Edgerton, nicknamed Ellie, pretends to be happy…all the time. How? She smiles. She smiles non-stop, with varying degrees and various styles. Ellie rarely stopped smiling…ever. Her brilliant smile was the only way she knew how to act to protect herself and her aunt Rachel from her uncle Douglas. Not so much broken as she had completely hidden herself behind her false smile. It. Was. Awesome. I know, I know. We’re supposed to like those wallflowers that don’t know her own beauty and with those rare smiles that lights up the room for the hero. This idea was turned on its head and it was buttkicking awesome. Instead, Ellie’s smile was a weapon, used to delude, seduce and hide. It was her only form of survival. Yet, it was at the moment when she dropped her smile did it truly hit how tired she was of smiling. Of pretending and it truly showed how smart and strong she truly was. It also made me infinitely sad that she had to pretend so much. I loved how she picked up on the hero’s deception and instead of throwing a fit or cowering in fear, she revealed her true self. Vere really was the person that Ellie needed and despite the fact he was very sweet to her - when Vere turned into an ass on her, I was truly devastated along with her. On top of that, when she played along – it was hilarious. Wished I could have actually seen more of that rather than be told.

Lord Vere, nicknamed Penny, pretends to be not all there in his head…all the time. His blundering rambling ways was his act to protect his secret agent identity. As the bumbling Lord, Vere was adorable. As himself though…boy was he a dark character. Too dark for my taste… and he really really pissed me off a lot of times at how he treated Ellie. He saw how Ellie was treated by her Uncle. Vere was intelligent enough to realize very quickly why Ellie acted the way she did and saw through her mask. Vere was aware of all the dangers and pressure she was under, yet he still treated her horribly. Maybe this was used to contrast against how bright he was as the ditzy character. Part of it was understandable since no man wanted to be trapped into marriage. His loss of a dream woman (that would never exist) was painful, but he really treated Ellie horribly. I kept waiting for him to grovel. The last part in the novel was not satisfying enough. I guess in his bumbling role, it gave enough light-heartedness to the whole situation to counter-weight it. All I can say was his horrible treatment of Ellie downgraded him in my book for heroes. Especially the lack of groveling. He’s too much of a self-denialer for my overall liking. The simultaneously caring for Ellie while pushing her away, it was annoying even if it was supposed to show his confusion. Too bad, he would’ve been great.

Best moments: I really enjoyed how Ellie and Vere were able to connect using discussions of Capri. It was really sweet and tender. Vere being the silly lord was also really funny overall. I loved how Ellie went along. Really did. And I really wanted to read about Ellie’s jam discussion. Don’t tell me, show me the entire thing please because I’ve been learning to make jam and would love to see Ellie turn everything on its head. :D

One of the most touching developments was Aunt Rachel. Her at the very beginning made me wonder if she would last the book. Instead, as Aunt Rachel was able to survive and rise above the hardship (as well as the drugs).

A little inconsistency was Uncle Douglas. By everything we’re “told,” this guy was supposed to be the unseeingly menacing type. I took it as the type that pulls strings and rarely lost control. I can imagine the events in the book were pushing him beyond his limits and that he was cracking under the pressure, but for the scene where we meet him again after the two first wed… I can hardly believe that should have been the first time he hit her. Evil as he maybe to strike such fear into Ellie, there should've been more. I know, how horrible am I to want a beloved heroine to suffer. In honesty, I'd rather she didn't suffer any physical attack at all. I was just a little disbelieving it was the first time.

Ok, there were several things I was quite uncomfortable with even though I understood why most were included.

Wedding night…did we have to use liquor? I never liked books where the first time main characters became intimate were under the influence of alcohol (which was what truly ruined my love for a certain book by my most beloved author). I do NOT like them. Even though I know this was supposedly the only way for these overly stubborn control freak characters to let go, I still don’t like it. Also, even though it was evident that the progress of their intimacies were to show the changes of their relationships, it was still rather disturbing that two of out three times were due to alcohol. The last time…due to nightmares as a push was so sweet, but thanks for pulling the rug out from under me the next morning. It was freaking gutwrenching.
The end revelation of Ellie’s parentage. It wasn’t that bad, but it wasn’t really that big of a revelation.

Angelica and Fredrick’s relationship was a sweet, but I was way way WAY too distracting for me. It’s great how they were able to help out at certain points, but I would have rather just focused more time to our main characters. The storyline took away much writing space and time especially given that it was in the second half. I avoided reading most of it until the second time around. Then the third time reading? I skipped it thereafter.

Also…what time period was this again? I’m not quite sure the “f” word was used in such a context yet, or at least not that often. Was it? I know I’ve been away from school for a while and I was always really bad with dates, but was it really? Where’s that book with the history of the f word? Maybe I should write it. Ahahahahaha. Kidding. I'm sure there should be several books out there already.

Overall, the story was great. Very interesting and different from the books out there. I do wish there was more showing rather than telling at certain points, but I do believe this was the first book where I’ve seen an author able to perfect this sort-of-telling-but-really-and-semi-showing thing, like when Lady Vere was first introduced to society. It was hilariously done and what interesting technique. Darn you for being such an awesome writer. ;) I say it with much adoration, of course.
at 8:58 AM