A Night of Scandal by Sarah Morgan 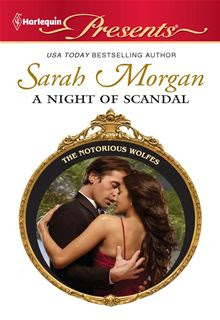 A Night of Scandal by Sarah Morgan

Please be warned I may be drooling throughout this review because your book was so awesome. I personally do not like reading celebrity romance. Not at all. Haven’t been one of those celebrity fangirls since my teens and felt like a complete moron for having done so. Instead, this made me re-evaluate a few thing…like how hot your hero was and how awesome your heroine was. And your writing? Oh my goodness, your writing. I certainly hope you will be writing a whole lot more long novels because this one was too short. So short I re-read it 5 times…in one day…the day I bought it.

Let me repeat, I loved this book. It has now joined the ranks of a few books I am forever carrying around in a large bag. Whether at work, home or play. Why? Because it was hilarious! Don’t get me wrong, this book was filled with plenty of heartwrenching angst, but this book had such a nice quality of teasing and humor in it. The character leapt off the pages. Their chemistry, the sincerity. Oh my lovely book. *cuddles book to tiny bosoms*

Nathaniel Wolfe – He was the mega-hot international super star. I cannot believed how you even tongue-in-cheek teased the idea of the whole alpha male by letting him play a role called… Alpha Man. Ahahahaha. He was so freaking damaged it was insane, but was so incredibly good. So closed off, but not entirely cold.

Katie Fields – I love this woman. She was awesome. Yes, she had her insecurities, but the she was a smart, independent and hardworking woman in her own right. And when our male hero was being an ass? Well, I loved the fact she held her own and called him out on it. I mean, are you kidding me? She’s awesome! She doesn’t let him get away with any of the crap he dishes out even when she’s hurt. This was an awesome protagonist. I have nothing else to say. I like her.

Story-wise was simple enough. Mega star Nathaniel was at the opening night of his first theatrical play as King Richard when he saw someone in the audience...someone that did something no one had done in decades, it shattered Nathaniel the actor on the spot. He rushed off stage and ran into Katie, the costume designer. In a moment of kindness and insanity, Katie “rescued” Nathaniel and took him to her apartment. This was when the hilarity started and where the intimacy began (smoldering smexiness). In an effort to ditch the paparazzi and being found out they “spent the night together” although nothing happened (not even a kiss, just hot sexual chemistry), Nathaniel whisked Katie away onto a private island and the dance began. Katie wants to know the real Nathaniel whereas Nathaniel don’t know why he wants Katie. Lol. It was great.

The characters were very well developed. The chemistry top notch. Everything was great. I’ve seriously kept the book in my bag and kept re-reading. I really like this books.

Let me just get one thing off my chest first…I did not like their names. Sorry. I don’t know why, but their names were a little weird. Katie sounded more like a nickname whereas Nathaniel sounded so formal. Maybe it was too show their personalities, but it ended up distracting me a bit.

Second…the sister comparison. I did not really care for it. It was minorly speckled throughout the story, but felt too much of an afterthought. Messed up family aside, everything else was awesome. This was an incredibly character driven book full of angst and humor. I know, great mixture. :D

Btw, the elevator scene? Holy moly, I was – ahhh…*fans self* Hot AND then funny? It was so intense I’ve been blushing every time I enter an elevator these days. Lol.
For once, the man isn’t accusing the woman of being a skank just because he’s pissed off or whatever. The author even has the characters poke joke about him being a “caveman.” When she said no, he listened. And he didn’t call her a tease, blamed her for being seductive…none of that nonsense. Where were you when I was growing up when I devoured these books? Lol. I was half hoping you’d be the one writing the rest of the Wolfe series, but alas, this was a beloved Present with multiple writers. You have now finished off what Super Librarian started…I am official sucked back into Category Romance. *throws confetti*

Also, I’m now ready to go look for some of your other books. Then probably buy them all. Mwahaha. I want all your books! (Yes, I’ve started saving up for a massive binge).