When Beauty Tamed the Beast by Eloisa Jame 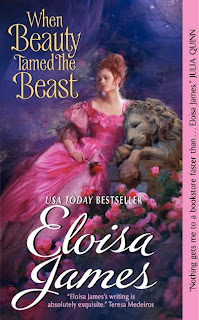 I was supposed to post this earlier and have some edits, but was distracted by some recent events. Next thing I knew...September! Lol. Time and whatnot. As such, please continue to excuse my typos, grammar problems, and incomplete sentences…have fun!

When Beauty Tamed the Beast by Eloisa James

This was a surprisingly funny and happy book, by which I mean very awesome humorous. I had been so hesitant these days of angsty books, but I my resistance to fairytale retellings were next to none. So I picked up this book gearing myself against some emotional rollercoaster and instead, found myself happily laughing at the humorous exploits of the characters. It had angsty moments mostly at the end, but overall, it was so hilarious half the time I was giggling nonstop.

It was a very interesting idea. Our gorgeous heroine, Linnet, was so frank and straight-forward it was most refreshing. Example, the fact she knew she was beautiful and how to use it. The more books I read, the more I like reading stories where the female protagonist wasn’t always so insecure with her looks all the time. Yes, we all have body issues, but even oblivion had limits. In here, it was blown to smithereens. I just enjoyed her tremendously. Even at the end when she was sick and the fact she did show all women care about out looks, Linnet was still able to pull the rug out from Pier. She was smart and gave as good as she got.

As for our hero…Pier, he was hilarious. He really was the beast in truth. His temper and attitude would have bothered me more if our heroine hadn’t been able to stand her own ground the entire time. She was often able to point out how Pier was being a major pain and sometimes even got the better of him. It took him a while, but when he admitted defeat, it was a very poignant and funny moment. I mean, seriously, we have the hero as a doctor and a cripple…which the heroine even points out to him half teasingly. He spoke of things just as frankly as Linnet and really made them the perfect couple.

I mentioned how this book’s humor caught me by surprise and I meant it in the best way. I think the two characters were very much on equal grounds. In this sense, when any bickering and problems appeared, Pier and Linnet were able to have this understanding of each other that made everything they say – even when mean – to have a great sense of connection. They called each other on their issues and were not shy about anything between them. I especially enjoyed the part where Pier went all a-hole on Linnet just because he had trouble controlling his attraction to her, Linnet was NOT allowing him to get away with anything. Instead, Linnet called him out on his behavior and went ahead and pointed out that he should not take his frustration out on her. It’s not her fault he’s got issues. How refreshing was that?

The intimate scenes were rather tame in my opinion and were blacked out in most cases, almost as if they don’t matter. So, I didn’t really care of them. I was too focused on the funny characters. :)

And the plot about the parents. Awesome. As of late, I’ve moved away from too many secondary romance stories in books because I usually find them to be too distracting or took too much away from the main storyline. This was an exception. The secondary romance between Pier’s parents was very well done. It also helped relate to the past as to why things turned out the way they did. Surprisingly, this secondary story was very good in His mother didn’t sit around heartbroken or wasting away. She got re-married. Even after her second husband died, she came back with a vengeance. :D

Even Sebastian was adorable. I liked his interaction with Pier. It’s always nice to see deep friendship and family ties that contrasted with how a character dealt with others. I just wished Linnet also had this interaction with people. She was a little too isolated in my opinion. Even with the kid to show her softer side, Linnet did not really have any friends. Plus, her maid was still an employee no matter how close. The dog was a nice touch though. I'd like to think of it as a form of service animal as well as plug for adopting pets. Horray for doggies!

Conclusion: A fun book to read just for fun. Lol.