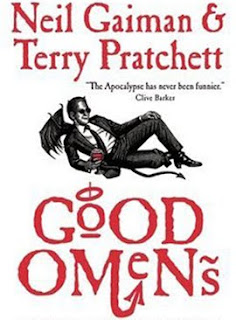 Finally, a review! Lol...and it's not even going to be a good one. Still, I'm alive. I still read. And I want to continue to write. :)

This book has been around so long I'm sure everyone and the children/parents knows the plot. Two very well known authors back in the days when they were still well known. Lol. So instead of the plot, I'm just going to ramble a little on my thoughts.

Let me first admit, I've read a few Neil Gaiman books, but not Terry Pratchett. Of the Neil Gaiman books, although I usually find them fascinating, I have a hard time connecting with his characters. More am I dazzled by the world he described.

This book somewhat follows that line of thought. I mean, come on, how hilarious was this idea. The anti-christ gets misplaced and no one knows until the hell dog found him. The idea of prophecies (Agnes was my favorite character, equal to Crawley and then came Aziraphale) no matter how accurate might not make sense because of context. These were great ideas, full of interesting characters and diverse situations.

All that said, I was again unable to connect. Maybe it was also the amount of time that has passed since this book first came out. The constant change in points of view, the vast number of characters...they all became very jarring and maybe I should've concentrated more, but I had trouble following sometimes. A sudden new character over and over, the multiple storylines, the push in time limit - I could only read in small doses, which doesn't work with the complexity. Lol.

Overall, I'm glad I read it, but I probably won't be re-reading any time soon. Also, this made me want to try to read more of Terry Pratchett then Neil Gaiman. Don't know why. Lol. It didn't really pull me out of my reading slump, but it did help me get some ideas rolling around in my head. So - good read, glad I read it, but that's about it. Nothing blew me away.
at 8:00 AM