There Is No Dog by Meg Rosoff 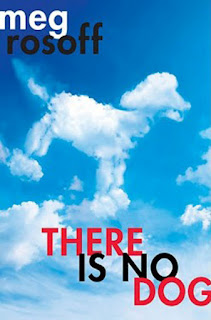 There Is No Dog by meg rosoff

Ok, so I admit, half the reason I bought it was because there was "dog" in the title. It also helped that the UK cover reminded me of another book that I adore with all my heart, but that's for another day.

Anyhoo~ I did hear good reviews on this book and thought I'd try something different to get me out of my slump. While interesting and certainly made me think, it wasn't as much of a "bam" as I had hoped (given the reviews). It was definitely different, in a good way. :)

"What if God where a teenage boy?
In the beginning, Bob created the heavens and hear and the beasts of the field and the creatures of the sea, and twenty-five million other species (including lots of gorgeous girls). But mostly he prefers eating junk food and leaving his dirty clothes in a heap at the side of his bed.Everytime he falls in love, earth erupts in natural disasters. So humankind is going to be very sorry indeed he ever ran into a beautiful, completely irresistible girl called Lucy..."

This was quite an interesting idea. What if the God of Earth was a teenage boy and he only got the job because no one else wanted it? Instead, the committee assigned Mr. B, a middle management to "help" out. Mr. B created the whales, by the way (at the insistence of Bob to also participate in creation). What got the story going was two eventful...er...events. ;)

Bob's mother, Mona, a beautiful drunken gambling goddess (the one that won the job of God of Earth in a cardgame) lost Eck, the unique last animal of the species of Eck. And of course, the aforementioned human Lucy whom caught Bob's eye and he wants to have sex with.

I don't know how accurate this teenage male was created given that my teenage years were far behind me and I'm of the opposite gender, so I'm weary to say the accuracy. Do 18-19 year old males really just think about sleeping in until 12, leaving a mess, snacking on junk food and sex? No idea. Are some of the horrendous individuals? Yes. Are some awesome creative people? Sure. But most, I think...don't act much like Bob. Still, if Bob was the creator, then maybe that's why he's kind of the extreme of it all.

Mr. B would be the typical average adult that took care of a teenager. Able to see the possibilities and talents, but unable to move kids in the direction to their fullest potential. And somewhat condescending.

There's Estelle whom became the feminine goodness even though she was the daughter of Emoto Hed (head honcho of a lot), a mightly feared God. Hed won Eck because Mona gambled Bob's pet away. How Hed's going to eat Eck...the last of his species. Estelle, quite unhappy with the turn of events, gave herself the mission to save Eck and in the process, fell in love with the chaotic Earth.

Ok, I'm making the story sound like a jumbled mess, but it really all makes sense once you sit down a read it. Lol. This was definitely an interesting book. I liked quite a lot of it and found an indescribable whimsical quality that seemed lost. Parts of the book read to touch upon something so foreign yet familiar - this idea of hope and life.

As much as I'm loving this book, there were quite a few pitfalls as well that I couldn't quite get over. I don't know if it's the trend now and maybe I'm finally starting to notice it, but what's with all the storylines? There were like three slightly interconnecting stories, but at the same time going all over the place. So many books these days have way too many people and story all going on at once. While I understand that life happens to be like that, it sometimes reads like filler plots. Or worse yet, like in this case, condensed plots. Certain parts were not as well developed as it could be.

Also, the religious part was definitely an interesting concept but ended up feeling too...western? I'm not quite sure how to explain it without sounding like I don't know what I'm saying, but the theology was a bit biased. The "god world" was basically like an odd form of bureaucracy, but kind of like the Roman/Greek mytho. The functionality of the universes and the "gods" don't quite make sense to me at times since the concept of aging was not explained other than they don't die. Example, I would have like to understand the background of Mr. B a little bit more than he's middle management and good at what he does. Family? Friends? Growth? Etc?

Whereas once we reach Earth, it was very Judo-Christian with the whole creation of the world by a teenager. Yet...now, this sounds crazy, but I also felt a touch of atheism. Yes, I know, sounds crazy. Bob and Estelle were a great contrast to one another in an odd sort of way. They both represent the two sides of younger generation. Both don't quite have much of a direction in their "life" yet, but both brilliant in their own ways. The situation with poor Eek and Lucy slammed them all together.

As characters, they were all pretty awesome. With human qualities and a godly maturity. No real antagonist, only flaws in characters which was great at times and annoying at times. I mean really, a goddess that was drunk most of the time? Another god contemplating eating her (even if it was just a threat)? Do teenagers really all seem like they're obsessed with sex and this idea of doom (if they cannot get what they want)? There were a few other things that bothered me, but in the end, I still quite enjoyed this book. It was a nice read, but I do wish I had waited for paperback. Lol.

I do love Eek. Then again, I love animals in general. It helped that the human setting was partially at a zoo. :)

Oh, and if someone understands the title, please point me in the right direction. I much appreciate it. :D
at 8:00 AM