The Guild Series by Nalini Singh 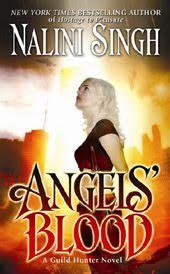 The Guild Series by Nalini Singh

(Disclaimer: I started this a while ago, so I totally admit to being a book and two novellas behind.)

This review was difficult for me to write since I am very conflicted about this series. Even when it was first announced Ms. Nalini was to have a new darker series with vampires and angels, my hesitation was apparent. Not one for angsty stories, knowing that it will contain darker elements as well as some gore-y stuff, it took a lot of self convincing before I finally picked up book 1.

I wanted to be hooked. I really really wanted to, I mean, come on, it’s by Ms. Nalini Singh - one of the best writers I have encountered…so I wanted to love this series, but truthfully, I’m just ok. Um, a little less than ok. Please take heed, there will be spoilers.

The good:
Ms. Nalini really has become one of my idolized writers. Anything place in her hands and mind resulted in literary gold. The characters were always very balanced and strong in their own ways, with realistic flaws and humanistic failings. The plots kept you on edge as you read page by page, telling yourself NOT to skip ahead for the chemistry/mystery/awesome interactions were not to be missed. Even minor characters made you drool at their completeness.

This series took a very different turn in regards to the history of vampires and angels. In a world ruled by the Cadre of Arch Angels that controlled the Angels and created Vampires, while born Hunters (humans with extra-ordinary skills) were the balancing group to protect humans. Vampires were once human who had to p

ast all these tests to reach immortality. To become vampires, these humans had to pledge a certain number of decades/centuries to the Angels that made them. Angels also have their own skills and hierarchy, with only a few able to gain the power of Arch Angels. Politics, power, poison.

First off, I always liked reading about long term couples so, I was curious and interested in how this series would develop given the Psy/Changelings were awesome. Problem was I have yet to find a great pair. No, not even Eve and Roarke gets me going (although it had more to do with the storylines than the two character themselves). You can kill me later for such blasphemy, but having actual characters develop and stay true to their personalities = freaking impossible. As much as I enjoyed watching Ellie and Rafael together, watching them grow and develop, learn and work together, how they became closer with each book – it was still weird, in my opinion. I would have thought they would have more conflict given how both were stubborn and set in their ways, but it was like “bam” they were together. Oh noes, problems came up, but two sentences later, it was better with deep mutual understanding. Ok, I’m moving into the issues. Lol.

The issues:
Inconsistencies:
Inconsistencies that were supposed to be subtle moments to reveal characters or whatnot became more than jarring at time. I can take characters that have a lot of internal conflict and contradictory actions, but some of the aspects in this series snapped me out of the story way too much. It was in almost each book. I did not feel any of the characters were consistent enough…especially Ellie, since she was our main perspective. One minute saying sheaths and swords were not about sex, then getting turned on by a knife really doesn’t make her character seemed too contradictory for my taste (book two) Also…you wake up after a year of coma and all was good? (book 1) Mind you, these events were like all happening lightning fast one minute while the main plot was moving agonizingly slow.

Angst:
Too much angst between all the characters where I don’t even know why I bother loving any of them, they’re just going to be tortured to some horrendous degree or had some hidden dark past. I read in another review (I think it’s Nath’s) that it almost feels as if Ms. Nalini was trying to make this series extra dark…like too much intentionally. The focusing on the torture, the grisly description – it became too much. Not because it was too gory, but it was almost too intentional as suspenseful or scary. It just became annoying and I found myself wanting the story to move on already and start revealing the issue/nightmare/problems. The rehashing became annoying.

On-going mystery where things were revealed so slowly, papercut on one’s eyeballs would’ve been more fun at that pace. This slow revealed aspect would not be so bad if there was not so much repetition in each book. I think the books were written in a way where it could be easily picked up out of order and the reader can catch up. The problem with this was so much repeating of the same problems without any solution at all. While, at the same time of these end-of-the-world-doom-situations happening one after the other. Really? How much can one take with so much doom?

For example, the mystery of Ellie’s past…the constant “Drip. Drip. Drip.” Or the shadow swaying on the wall… Good the first time around, but completely unresolved by end of the first book. The second book had more revealed more to what happened to Ellie and her family as a child. The problem? That end shocker extra person reveal then so quickly wiped out was completely unnecessary. I literally re-read that section five times to see if what I read was correct, before I resisted the urge to roll my eyes and continued on. Third book… not that I did not enjoy the story behind Rafael’s life, but again, the end was still too abrupt and confusing. Also, as much as I liked strong characters, caution was thrown to the wind in the decision-making department of supposedly powerful and smart character’s head just to show how unafraid of death or how strong/good at their job these characters were. And no, I really don’t believe DOOM would be happening so quickly one after the other three books in a row.

Sequel baits of side characters – although this was more a testament of Ms. Nalini’s genius. All her characters were so interesting (even some of the minor antagonists) that I know many readers would clamor for their stories. Each character was so full of torture it was impossible to ignore. And as a very clear example, the mini summary for Dimitri’s book would be overflowing with angst and torture or whatnot. All the other characters – angst, torture, hopelessness all meshed together in this odd hierarchical world of ancient unexplained magic mixed with high technology and finding their happy significant other just bordered a little too much on unbelievable for this little reader. I almost don’t know if I read an UF or what. Even though Ms. Nalini wrote multi-plots/storylines exceedingly well, as I’ve mentioned in my last review, it was getting a little too much for me. My tiny brain shuts down after so much stimuli/information.

Conclusion: Honestly, I’m sure a lot of people have loved this dark turn of storyline since there seemed to be a lot dark angsty tortured romance paranormal stories out there, but these were never my cup of tea. I guess people whom love J.R. Ward, Christine Feehan, etc. She’s still great, but I don’t think I’m up for this type of stories. I will probably proceed as I had before, purchase when I’m up for it. Or I’ll borrow from the library. This is a Nalini Singh book so I will always support, but probably not a must-buy series.
at 8:00 AM