My Fair Concubine by Jeannie Lin

Ok, I totally meant to write this review before The Sword Dancer, but RL got in the way. 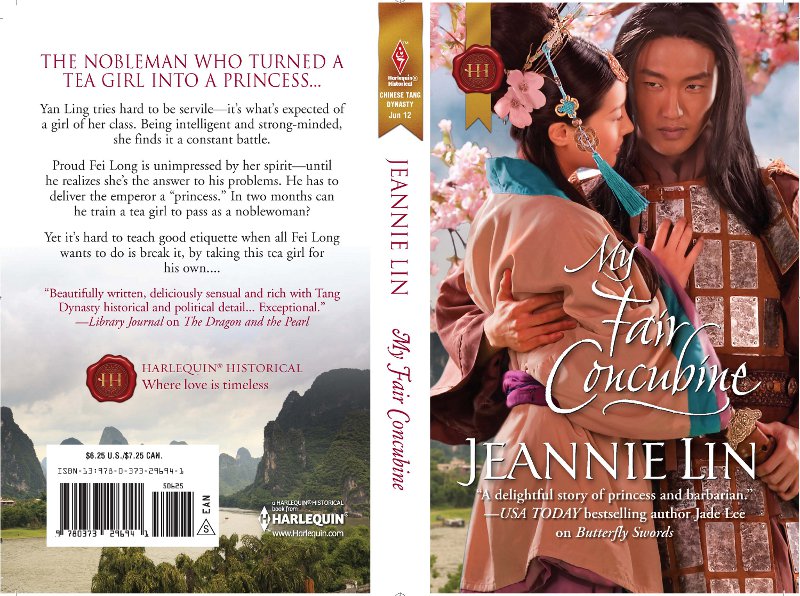 My Fair Concubine by Jeannie Lin

First off, I'd like to say a grand Thank you! to Super Librarian Wendy. I had been trying desperately to seek out a good read away from the crazies, the mundane and the overall lack of reads. I get more books for this awesome librarian then all the blogs I read...combined. That's saying a lot.

Second, Thank you Jeannie Lin for writing a book that finally filled in on a niche I had been dying to have for decades. Yeah, you read right, decades. It's been so hard to get some great Asian stories since my reading skills has become non-existent.

Third - this book helped me get out of a slump. You read right, I am out of my slump! Err...sort of, ok. Not really over my slump, but I'll explain a little later on in another post that's probably more boring.

THE NOBLEMAN WHO TURNED A TEA GIRL INTO A PRINCESS…
Yan Ling tries hard to be servile – it’s what’s expected of a girl of her class. Being intelligent and strong-minded, she finds it a constant battle…
Proud Fei Long is unimpressed by her spirit – until he realises she’s the answer to his problems…He has to deliver the Emperor a ‘princess’. Can he train a tea girl to pass as a noblewoman in two months? Yet it’s hard to teach good etiquette when all Fei Long wants to do is break it, by taking this tea girl for his own…

To begin, the premise of the story is very simple and kind of like My Fair Lady. High born guy meets low born girl. Guy teaches girl to be lady-like. Two fall in love. Overcome problems within moments of the end. Happily ever after.

Ok, let me just say I really really liked this story. I wasn't even sure if I wanted to given that the title was about a concubine. It was a surprise when there wasn't a single concubine present! Ok, there was one, but she went to become a buddhist nun so soon into the book, I just thought of her as a nun.

Where to begin... Yan Ling was a tea shop girl, meaning she was a servant/employee at a tea shop. Fei Long happened upon that tea shop to try and get his little sister back as she had been promoted to the title of Princess to be sent off for a political marriage Hequin.

Much like with The Sword Dancer, the research Ms. Lin puts into her books were stellar.  I love books I can learn from and everything was so subtle and realistic.  I didn't feel as if I was being "told" who things were or how things worked.  It all came together so well, with the day-to-day life, social hierarchy, and the love story.

I liked Yan Ling and I really loved the fact that even in the beginning, she stood up for herself.  It sounded much like how a young independent woman would react. At the same time, she was smart and humble enough to apologize for her mistakes.  A trend I have noticed was the place on education...how it brings people together.  Granted, I thought 3 months was rather fast for her to be as eloquent as she got, but then again, she was a smart young lady to begin with.

Fei Long was hot.  Not the cover model, that picture was just a little odd.  The character though, whew...hottie.  Smart, strong and very respectful.  He was responsible and quiet.  I enjoyed how that even though Fei Long was a quiet man that took the burden onto himself, he was actually very passionate in his own way without being crazy.  It was like a gentle strength.  Lol.

Now, I loved Dao.  When I used to watch the Drama series growing up, I was always more interested in the side characters. I always wondered why some of those servants would remain so loyal even when their masters and mistresses made stupid choices after another, or would remain with a single person the rest of their lives - sacrificing everything.  Then again, those stories really just used the "servants" to drive the story without giving them real backgrounds to explain such loyalities.  Here, I love how Jeannie Lin gave one great explanation that I'm sure happened more often than not.
*SPOILER*
Dao was Fei Long's half sister as her mother was a servant there.
I loved how Dao was expressive, smart, inquisitive and that she and Yang Lin were friends.  None of that stupid female rivalry stuff.  Instead, they were more like sisters - sort of.  :)  I really really wished I could've read the novella, but I'm not good with ebooks... The last time I read using my sister's ipad, if fell and slammed on my face.  My nose did not appreciate it.  Someday though, and someday soon...I will get myself a good e-reader and read more Jeannie Lin!!!!  Among others. :)

Ok, some stuff:
I wish there was more expansion about the social/class problems and such that was lightly touched upon, an example, Concubines.  As happy as I was the two h/h got together, I had a hard time believing in that time period someone of Fei Long's status could've married a tea shop girl as a main wife.  A concubine, yes, since that's kind of how it was back in the day.  First marriages were arranged and men had no real choice either.  Therefore those of class and money often married concubines of those normally unstable status to be with those they loved.  Sort of....I'm really butchering my history lesson here. Fear not, Ms. Lin does it wonderfully since I thought about it some more. Fei Long didn't have both parents or elder relatives around to arrange his marriage...which begs to differ how he was able to wait so late to get married to begin with.

Something else I noticed just because - how people call each others name was a sign of closeness.  It's more common to use the last part of their names as a sign of closeness, or if using the middle character (first character after surname), people usually add another word "-er" for girls and such. Plus, in most cases, people would never call each other by their names unless they were very close to begin with (which did make sense in the story to show how they were getting closer and closer, at least emotionally).  So it threw me for a little when I saw...then I got used it. Lol.

Lastly, maybe because it's a Harlequin, the resolution to the problems were so fast I barely caught it.  Not that I didn't enjoy how it happened and the happy resolution.  The nakedness...oh and my favorite part about malnourished tiger embroideries. I giggled for days every time I read it.  There were many cute and humorous parts throughout the book. My favorite kind. :)

So, if you haven't read it...you should.

UPDATE (DEC 2013):  I figured it out...about the ending.  I have been too used to tragic asian romances that it felt odd things fell together so perfectly.  That's the thing isn't it, after reading so many other books, it hit me how perfect this book was.  The ending was perfect and actually realistic.

The crazy in me studious part of my personality kicked in and I actually found the occurrence of marriage of low class women into wealthy family as their "Wife" was actually possible.  Even an Emperor did.  One even had only one wife, ever.

Either way, I come back to this novel.  I still love the malnourished tiger shoes.
at 8:00 AM