The Sword Dancer by Jeannie Lin


Oh yeah, I got the ARC a while ago and really had to sit on my hands and bite my lip to keep quiet.  I had started this review, but honestly RL has been kicking my butt...So a little late, but still in stores. =D 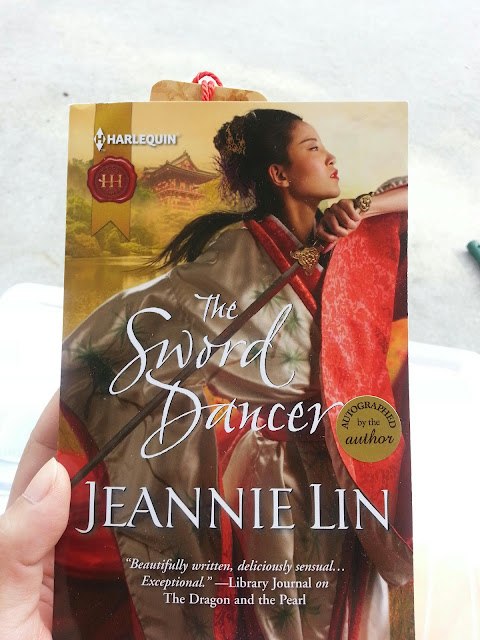 The Sword Dancer is the second Jeannie Lin novel I have read and I am so happy to keep reading her books.

Thank you Ms. Lin for sending it to me.

Sword dancer Li Feng is used to living life on the edge of the law--a woman alone in the dangerous world of the Tang Dynasty has only her whirlwind reflexes to trust. She "will" discover the truth about her past, even if that means outwitting the most feared thief-catcher of them all....

Relentless, handsome and determined, Han sees life--and love--as black and white. Until he finally captures the spirited, courageous Li Feng, who makes him question everything he thought he knew about right and wrong. Soon he's faced with an impossible choice: betray the elusive sword dancer he is learning to love, or trust his long-disregarded heart and follow her to dangerous, tempting rebellion....

For once, the blurb in the back is pretty spot on.

I don't know where to begin writing this review without sounding like a gushing fan girl. So I'm just going to make it short and sweet.

Girl has mysterious past. Girl does shady stuff with skill and wit.  Boy sent to capture girl. Political intrigue! Some chasing and helping each other.  Hot calligraphy. More chasing and helping. Secrets revealed! Angst and separation.  Smart move and horray! Together again.

Li Feng was an awesome heroine. She's no shrinking violet (or peony since we're on the asian theme). For one, she has a day-job; she's a sword-dancer.  I mean, as sword-dancer!! Is that awesome or what?  She was very realistic, with conflicted loyalties and desires.

Han is equally cool. :D   Responsible, smart and skilled, but had to deal with tough decisions like a real person.  No magical all powerful loaded (i.e. unrealistic) powers.  I loved how even though we didn't see much of his family, the familial links were still hard at play.  Again, very realistic relationships and experiences.

You can tell the author did very thorough research on the Tang period.  I almost felt as if I was watching a wuxia series. :D  There were layers upon layers of culture, life, and politics.  At no point was this world painted as "exotic" or "mystical" like a lot of the stories out there.  I cannot even begin to describe what a relief and enjoyment it was to read a book featuring both Asian h/h without one or the other made...I don't know the word other than Oriental exotic.  The Sword Dancer was a great combination of romance, adventure, and mystery...set in historical Tang Dynasty. Plus, I don't want to give too much away.

A very nice scene that I'm starting to think take part in all Jeannie Lin novels: how education/knowledge can be extremely sexy.  I mean, seriously.  Han's ability to read and write was like such a huge attraction for Li Feng.  Finally, for me at least, instead of being some shirt ripping, richer-than-Midas, all powerful, man - we have an actual human being that looked super hot writing. Hehehe.

Seriously, I felt like I was ready wuxia novels.  That's how good it was.

Another plus: It's a well known fact that I'm not big on angst-y stuff.  I like my stories simple and sweet.  Too much drama gives me a headache and the fact a lot of angst-filled stories always felt false...as in, I really did not believe all those things would happen at once, or omg there is no way someone would react like that.  Here though, there were some really worthy angst.  The familial ties, the inner conflicts, the multiple conflicts - it was intense and it was sweet and oh so good.

Although the story cleaned up very nicely towards the end with the major conflicts/big bad, if felt a little too unrealistic at times.  Especially when at the several big reveals that all started appearing at the end even if it made sense.