Well, I had accidentally posted the unfinished review on Thursday.  It wasn't ready yet. Just slippery fingers on small touch-screen problems on my end.  Now, with a picture and links...plus a few minor edits, it's ready to go! Enjoy~ 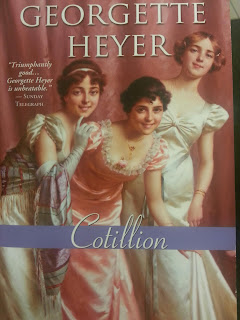 
This author was introduced to me a few years back with much rave about her being the queen of regency romance/historical romance. Since I liked those enough, I thought I’d give them a try. Out of the five I tried, this was the only book I’ve really liked so far. The rest, not so much. I probably won’t keep trying too hard to read her books despite Heyer being much loved by so many people and created the foundation of much historical romance novels. I can see why her books were so lauded.  They were very accurate, the ideas were very cool, and I noticed how a lot of the plots were basis for so many of the current Historical Romance novels we read now, but I had trouble getting into reading them. More on that below.

Cotillion, the name of a country dance, centered quite a huge cast of characters. The main storyline was a fake engagement between Kitty and Freddy, Kitty to want to experience London and make her intended fiance Jack jealous. This propelled everyone into this “dance,” if you’ll excuse my pun, of all their relationships.

The story was very simple (sort of) and was more about a bunch of people interacting, falling in love, being together, trying to be together, etc. There were no real antagonist unless you count Jack, which I don’t. He’s more of a fool than anything else and he stayed in character. There were several secondary romances which were all fun in their own way.

I guess that’s the gist of this book: a bunch of people of marriageable age interacting at parties, slowly learning about one another and falling in love. Granted, in Heyer’s books, I saw much of the tropes, elements, and foundations to many of the bestseller stories nowadays, but nothing that really knocked my socks off. Cotillion was the one I remembered enjoying reading, but even now, I have trouble making out the storyline. No one really grows or changes, but their opinions of each other changed as a result of more interactions.

I was actually very excited about having a somewhat bumbling hero, a rake that stayed a rake, and a heroine that was sure of herself and went after what she wanted. It contained all the above, but after I finished reading, I was left with that little flat taste of a soda that was no longer carbonated. I liked the book, but nothing wowed me. A few lines were funny and I enjoyed the idea of how even the characters pointed out the realities of what was romantic vastly differed than the crazy Heathcliffs of this world. Maybe the historical accuracies were interesting, but it wasn’t mind-blowing either.

In all honesty, I don’t think this author (as great as she was) really respected her own works. This may sound terrible, but I’ve read books where simple language and commonly used storylines read brilliantly because the effort and affection the author placed into her/his work were tangible with every word. On the flip side, a literary genius piece of well-documented and researched paper could put me to sleep in under 5 minutes. And yes, there existed books of everything in between of all combinations and varieties.

In the end, I guess I did not feel vested in the storyline, nor the characters themselves.  The conversations were witty enough, the characters engaging, but was more of a fluff read. My conclusion, as great as Georgette Heyer was and would be read sparingly.  Definitely give her a try to be able to see the sources of a lot of the plots and stories we read nowadays.  It's also an enjoyable read on it's own.