It Started with a Kiss/They Kiss Again

This was going to be a short review just because I loved it so much, I don't have much to say... I got sucked in watching this non-stop.

OMG, if the previous two posts were about tv shows of romance novel equivalent , then nothing will beat this series.  It has been adapted so many times and it's still so good. 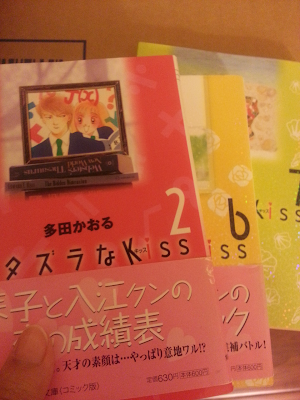 (I only found 3 books out of my set, freaking boxes!!! where are my books!)
I don't know how to even explain this series because it started as a manga, which was awesome.  It never finished though, since the mangaka (artist, writer) passed away half through the series.  What's great about this series, for me, would be how it grew as a series itself.  It started with high school romance, goes to college and when it ended, they were already working .

The basic story was about Kotoko, a really stupid (school-wise) high school girl. She was in the bottom class, does terrible in her studies, but was a very earnest and hard working girl.  It started with her love letter confession to Naoki, the smartest (seriously, IQ was over 200), popular and very handsome guy.  He completely ignored and rejected her.  As fate would have it, their parents knew each other and when an earthquake destroyed Kotoko's house, she and her father moved in with Naoki and his family...

I'll be talking about the Taiwanese version made in 2005.
It Started with a Kiss
Joe Cheng, Ariel Lin and Jiro Wang There were so many aspects of this series that has been so enduring after all this time.  Part of it was the beginning.  The entire story really captured the essence of puppy love, but changed and grew.  As the characters matured so did their relationship.  It's equally sweet and heartbreaking.  I cannot help but love watching this series.  This was also the series that really made me a huge fan of Ariel Lin.  I was already a fan before, but this one cemented it.

Even while it followed closely with the manga storyline, there were still some changes and I felt it was made better.  Everyone was more expressive and the humor was top notch.  Omg was everything funny.  They way they filmed and the way the actors/actresses interacted was great.

Although this was a wonderful mix of a romantic comedy and school romance, I think the best was the the character growth.  It was a great coming of age story, of growing up and following your dreams vs. responsibilities/expectations.  The characters had their personal struggles, the friendships and life, even stuff like choosing majors and careers.  More importantly, if there was one thing why I think this series was so enduring was this discussion of dreams and goals.  It very much captured that youthfulness, sometimes the idle and unsure as well as the strength and endurance to chase after one's dreams.  It's so wonderful.

One thing I loved was how family and friendships were all an integral part of the storyline. I love how the parents are friends.  One aspect I also loved was that they all had their own friends and the friends weren't all pairing up.  Instead, the focus was on our two protagonists and their growths.  Actually, all the character grows and we grow up with the characters. It's so good.

The two main characters acted in character for this side story/mv.  So good.

It first of the series was so popular that they actually made a second season...which, to my knowledge, tends to be very extremely rare.


The entire cast came back and literally picked up when the first one ended.  Honeymoon! Even as a young girl, not that I that young when this came out - moving on, I always preferred stories about what happened after the "ever after."  Courtship were always fun and wonderful.  Couples overcoming all forms of adversity always made juicy stories, but I wanted to see the life after these initial courtships and romances.  This definitely delivered.  So many stories end with marriage, but many people understand that marriage was merely the beginning.  I wanted to watch how these people we have cheered on and loved continued to adapt as they were faced with greater responsibilities.  I adored the fact that the original manga went into these chapters.  The fact they even produced a second season attested to the popularity and the awesome greatness endurance of the stories.

They did make quite a few changes and I am conflicted-love with the ending.  They left it open with a dedication to the writer since it was unfinished when she passed away. ;_;  It's ok...this series was wonderful.  Also, I take to heart that they had so many kissing in this second series that I fully LOVED every second.  It's hilarious since the first series only had 4 kiss scenes.  This one had it non-stop.  *dreamy sigh*


Ok, I just re-read this and it's very evident I've said nothing except how much I love these two series.  Hahahaha.  I'm sorry, I was rewatching and then I just forgot about blogging.  It's so good and addictive.  I might as well just learn to do recaps and summaries. One posts can hardly describe the many depths and stories and characters, the changes and growths.  I loved every character, especially the mom.  *happy sigh* I love it.

Rate is 9 all around. Watch it. Just watch it.  Or read it. And watch it.  I'm going to go rewatch it again.  When I start watching, I cannot stop until I finish and I want more, so I rewatch.  Excuse me while I go silent for goodness knows how long rewatching all my favs.

P.S.  When I watch this series, I'm completely transported back to my school days.  Old Man was wondering why I was screaming, giggling, jumping around, running around like a teenager while watching this.  >_<