Well, I'm rather surprised I wrote this post so quickly and so soon.  The series just finished.  *sigh*

What part of extreme disappointment do I begin at? Cuz this series started out extremely good.  Really, really good.
It was so good, then around 20th episode, it took an extremely unnecessarily crazy nose dive off the writing cliff. It got so annoyingly predictable and painful to watch I wanted to cough up blood from the internal injuries and sufferings of having to watch. 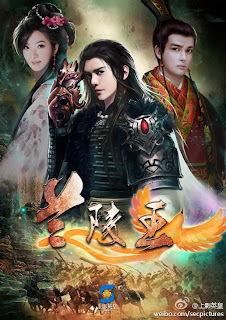 And the ending, oh gosh the ending...thank goodness the great actors and actresses still made it somewhat watchable.  It was overall so overwrought it became boring, right before they stabbed you one more time and twisted that knife a few times scraping bone.  I, personally, do not like it when people try to force emotions onto others and the ending was like one big pity-fest for everyone.
Seriously though, what is it with these bittersweet endings in Chinese stories? I am sick of it! 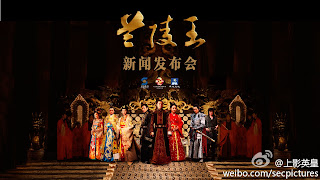 The acting was superb through and through.  Absolutely wonderful to watch where blinking was painful because something would be easily missed in the character's expression.  Each actor and actress was so realistic and invested.  I know a lot of people were saying that Feng Shao Feng was not exactly one of the prettiest look male actors for the role, but I have got to say...I have never seen such great acting.  His every movement and facial expression was something incredible to watch.  Simplest example, the few episodes when Lan Ling Wang was hiding his identity and only his eyes and sometimes his mouth was showing...the actor fully revealed every thought and emotion to us the viewers.  Not many people can do that.

The other male lead, Yuwen Yong was great.  His progression as a character was almost the most consistent and much of it had to do with the actor.  He was great...they all were.

Our few antagonists, like Gao Wei and Zheng Er - their acting was equally heartbreaking and crazy where I felt equally love and hate for them because of the acting.  The characters themselves, not so much because in the end, they caused their own sadness with their personal jealousies and pettiness.  The acting was awesome though.

Even the secondary characters, Chen Xiao Dong, An De Wang, Xiao Cui, General Hulu...the list goes on and on.  Everyone was great... The writings, stories, and visuals were nice, but nothing beat this cast.  It was incredible to watch.

Although I must painfully point out one sad thing, my favorite actress...she definitely needed to work on that pregnancy/childbirth bit. I did not come close to believe she was in labor. Otherwise, she was awesome in every other aspect.  Especially the part when she took poison...I mean, omg, she really looked like she was suffering from a seizure reaction or something...awesome.


Then...
I was beyond disappointed as the story came to a close.  This series...the story really could have been something incredible, but they chose the most cliche (and easier) path. Sad.  Let me just say: Just because all your friends are doing it, that just because it was how it was always done, doesn't mean you should do it! I found it to be full of missed opportunities.  The moment they veered off course into the unexplored woods of unique stories, something pulled them right back into the status quo.  Ok, I'm exaggerating, but you get the point.

For me, although many of the plots and characters were nothing new in the world of fiction, everything had blended very well together.  Each character and the story they were telling were very unique and special.  It was refreshing in it's own way and was extremely addictive fun to watch.  I really really enjoyed every moment.  It was exciting and willing to make things complicated.  People had their own reasons for making the decision they made and it brought a refreshing view to some old subjects about people, fate, and choices.  Then, it got to the halfway mark.

After around episode 20, the almost ALL the characters were acting really out of character.  Their personal growth took a leave of absence.  Everything started to become cliche and really really prolonged sense of dragging everything out.  Then I found out it was supposed to be 35 episodes, but they ended up with 46 to make more money...*sigh*
It didn't help that the story was doing more "telling" than "showing".  Before, the flashbacks were good since it allowed me to invest more into the story.  Later, it's just a lot of repetitive "talk" and got me really bored/annoyed.

When a story forces the characters to act so out of character in order to move the story forward...well, you know you're in trouble.  That's exactly what they ended up doing here and that was the biggest let-down.   While this series started off with a soul-sucking addictiveness, it dragged on into a typical storyline...which just meant it became another typical show.  It was no longer as different and unique as it started out to be.

They stayed pretty historically accurate, which was extremely surprising for me.  That's both good and bad.  Good because when I watch things, I want the writers and storytellers to be as accurate as possible, or at least attempted to do the research.  Nothing annoys me more than those wallpaper worlds where everything can be manipulated to fit into the plain flat background to showcase something or another.

Certain historical aspects were changed, sometimes timing, while other subjects and themes where integrated.   They did make some changes, like merge Lan Ling Wang, Gao Changgong (高长恭) with Hulü Guang (斛律光) in terms of importance with the upcoming battles since Emperor of Zhou mentioned of Hulü, "If he were still alive, how can I get here?"(此人若在,朕豈能至鄴!) (source).  Even though I was rather excited to see him make an appearance.  So cool.  They even killed him in the same manner, although for different reasons.  So they get major points for all the history.  I was seriously surprised by it. 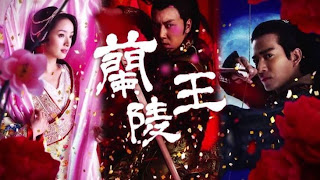 They did bring up an interesting question of destiny/fate vs. free will, is it possible to change your destiny?  It's not a new question, but they did put forth several different ideas.

It's impossible: Grandma trying to change Xue Wu's fate to not be involved in the outside world and be an average normal girl, yet cannot change the fact her role as Heaven Maiden.
It still thundered, and a chicken easily led Xue Wu out to meet Lan Ling Wang.

It's possible: Xue Wu and Lan Ling Wang was not fated to be together, but they ended up together because fate changed to ensure that things still sort of qualified into fate.  Same with Lan Ling Wang as he was fated to die.

Changing fate has consequences:  The woman that's supposed to be Lan Ling Wang's wife...well, she turned cruel and evil instead of the devoted wife, but it stayed within character (sort of).  It could just be the actress was really good. Lol.
Another consequence, Xue Wu died in place of Lan Ling Wang.

I know the male leads have, what's the word? shippers? I don't know.  Anyways, aside from whom is better for our Tien Nu, Heaven Maiden, I rather liked the focus on the characters.  What I felt they did was a very interesting portrayal of what it took to be a true leader.

A good person does not make a good leader.  A good leader does not mean a compassionate person.  People that have similar life experiences does not turn out the same.  Just because they were good materials does not mean they can fit the roles.

Gao Wei was portrayed as somewhat the worst because even though has the capability to navigate politics, he falls easily to jealousy and doubt, thus easily swayed by those around him.

Lan Ling Wang seems the best, but even as he was admired and great skills on the battle field, he lacks the manipulative and sneaky nature needed to navigate politics and easily falls for traps.
He willingly risked his life (as a Prince) to save his brother in arms.

Emperor of Zhou, Yuwen Yong, ends up being the most suitable.  Even though he has his compassionate side for those he cares for and he's fighting for the same reason an Lan Ling Wang - for a peaceful world, but is much smarter, manipulative and equally cruel.  Whereas Lan Ling Wang willing risks his life for one person, Yuwen Yong was willing to kill his loyal friend in order to clean out all the villains in his mists...

All three "leaders" really had the exact same goals.  They wanted to be able to bring peace and happiness to their people, to be good leaders and lead their country, yet they all went about it in different ways.  Even as all three had to go through personal losses and problems, the way each individual dealt with the problems showcased their leadership abilities and we all know who the winner will be.

Mainly, Lan Lin Wang and Yuwen Yong are like mirrors of each other.  If not for being from different nations, they would probably be very good friends.  If they were in the same country, they'd probably easily until the entire place.  They're very similar, with a very obvious sector of love for Xue Wu.  Oh well, fate works in it's own ways... 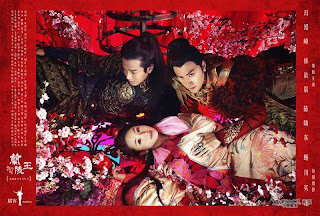 The overall story archs were very tight and that was a great boon for this series. A few things that annoyed me:

Xue Wu lost some of the characteristics I adored, her fearlessness got replaced by an almost tstl moments that really annoyed me. It made her much weaker as a character and felt more like the writers changed her personality to fit the storyline.

Favorite characters: All the grandmothers.  Omg, do I love them.  It's so tragic, but I loved all three.

So, I most definitely recommend this series.  I personally enjoyed the costumes and actions.  The storyline was great up to a point, so I will basically skip all the parts I don't like just to rewatch. Lol.  I can't stay away even if I wanted to, but to save myself some grief and sanity, I'm going to avoid certain parts and episodes then make it a happy ending in my head. *sigh*

P.P.S. I still love the music.