Pumpkin of an apology

I had reviews planned, I really did.  They're still being reviewed, edited, added, pictures, etc...the problem was the pictures. I can't find my books! They're all in boxes and I want to post them.  I even thought I could just buy another copy, but it was sold out! On all websites!! What the heck?  Not that I mind used, but then the shipping always gets to me.  Aghhh...

Was thinking about posting some comments/reviews (maybe a rant here or there) about movies and tv shows.  Then I encountered the same problem.  My DVDs were in boxes again?!!! Omg, I need help.  So need help.

My apologies for the delay, until then...please enjoy some pictures from my garden.  This time, its my pumpkin sprouts! 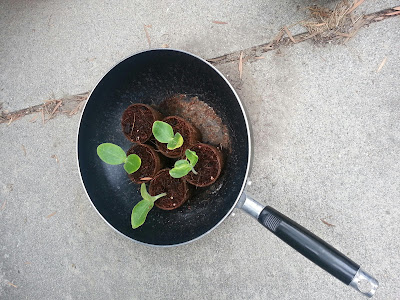 I am trying to grow quite a few since most of them won't survive.  There's also been a major pest problem in my area and I want to avoid using pesticides and insecticides.  It has been a huge fail at the moment.  Lost all my sunflowers (and I planted a LOT), but want to keep trying.  Going to plant most of them in the ground once they get bigger.  Until then, tiny pots the go. 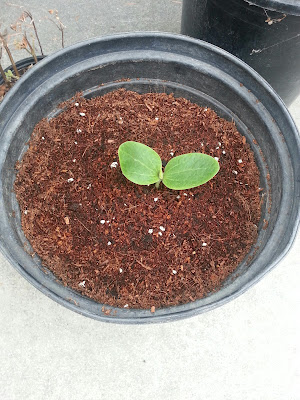 Recently, I read about container growing and someone had mentioned it was possible for pumpkins and watermelons.  I probably started the pumpkins much later than I'd like to, but a pumpkin is a pumpkin.  I'm going to give it a try, this container growing thingy. 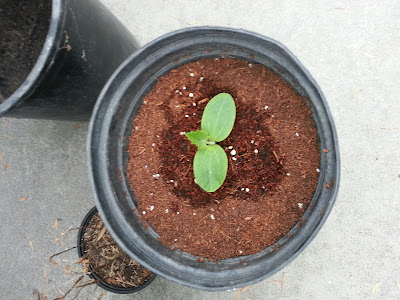 This is my new flower section.  Most are sprouting a little, but I am having major problems with some of them.  They're not even sprouting.  I've also had problems with sprouts dying right afterwards.  No idea what's going on.  I'm using good potting soil too! 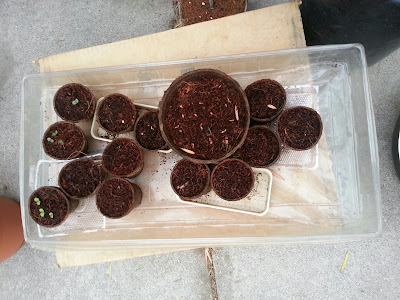 The calendula and borage sprouts have exploded.  I so don't want to discard some of them... I want to keep them all!  These seeds were fairly old too.  I think from early 2011.  Gotta love seeds. 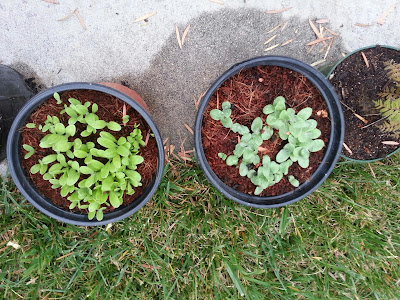 This is my little herb section.  My rosemary plants are not doing well at all.  My lemon balm is dying as well.  Thyme is doing ok.  Single sage came out and seems ok at the moment.  Only one hyssop survived and it's kind of surviving. 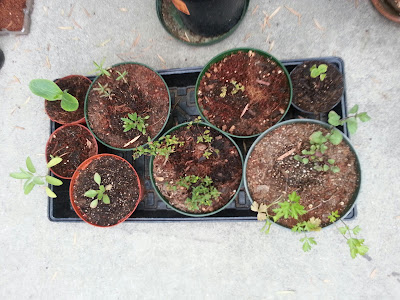