Ravishing the Heiress by Sherry Thomas 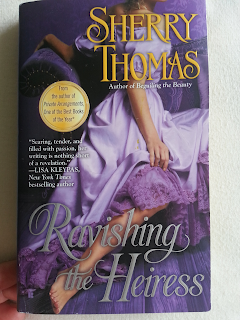 Ravishing the Heiress by Sherry Thomas

One thing that I loved about this book was how a type of storyline I always detested was tackled...childhood love.  Although not explicitly stated, it showed both sides of the same coin.  The first was the idealized young love, like the kind you cling onto when you're older reflecting back.  The second one was a developed love (like friend to lover), where love is slowly built together.  There will be some spoilers (but it's been out for a while so I should be good) since I'll mostly be just talking about the two protagonists.

I would say Millie was the most subdued heroine out of Sherry Thomas' characters that I've read so far.  Although equality intelligent and brilliant, I felt Millie was less manipulative that some of the other heroines of Sherry's novels.  She was equally good at putting up a front, but she was more...repressed.  Part of it was understandable given that Millie was 16 when she got married, but at the same time, I would have thought she would have done something...anything, I don't know, start a charity? Go travel more?  Granted, she did garden so maybe that was her form of self-expression.  She was an incredible character, but I don't know of anyone that could've survived the type of longing and torture she must have went through.  Yes, she was his most trusted friend and in his own words, family.  At the same time, to know that she was unable to have any part of him for 8 years?  His heart to his childhood sweetheart while he's pounding down on one woman after the other?  ....um, no thank you.  At the end, when she asked for her freedom, I was like "Yes!!! Leave him!!!"  Alas, this romance did not end that way. Hahaha.  At the same time, I understood it stayed within in the time period.  A young woman by herself, heiress or not, she was legally and financially reliant on the males in her life.  She really didn't have that many choices.  I just wished she would've done more.

Fitz was an idiot, a selfish-oblivious-idiot.  Yes, I understood his angst and sadness.  His entire life changed and there was nothing he could do about but he then he acted like such an annoyingly stupid person at times I felt no sympathy for him.  None...  Even towards the end, it was annoying.  I never felt his conflict was real.  Oh noes, I have do decide between two young beautiful and hot women, blah blah blah. He didn't suffer enough, in my opinion, especially since he was the one making all the mistakes.  He was just stupid for the most part.  Yes, Fitz did act very responsibly as he got older and was protective enough of his family and Millie, but in the end, his stupidity never changed.  He never came to any realization on his own.  Millie had to be the one to give him the ultimatum... to let her go.  That's what made me truly realize how much Fitz was stupid.  What did he think, that his legal wife was supposed to live happily by herself while he go live with his mistress? Right...  The worst part was that he was probably in love with Millie for years and just didn't acknowledge it.  Which made me uncomfortable as he continued having affairs and mistresses.  Whether he admitted his love to himself or not, it was still bordering on something I don't like reading.  Realistic of it's time though.

Ok I know I was being harsh, he just really annoyed me for the most part.  I felt like everything was just handed to him.  His struggles were so flimsy in comparison to what he put Millie through.  Also, Millie forgiving him so easily...and after all she had put herself through?  She was almost martyr-ish, at least more so than the other heroine's Sherry Thomas wrote. Plus, although I understood the necessity of flashbacks...there was too many (I guess I'm not a flashback girl).  It drove me crazy.  Almost as much as the sequel-baiting... *sigh*  No, the baiting sequels annoyed me more. Lol.  As much as I enjoyed Helena the other family members, I don't like too much distractions. I just want focus on the main characters without anyone else stealing the scene with their angst. They can wait for their book!

Oh goshes, hahaha, this was an riveting book as it has been evidenced by my obsession with it.   You have to hand it to Sherry Thomas for writing stories that really get to inside and rip things about.  There were times where I felt near tears at the sadness and pain Millie must have felt. Honestly, a young lady married off at 16 and then both her parents pass away so soon after only to be stuck with a man that doesn't love her.  So angsty.  In the end, I felt the main internal conflicts for both the characters was a case of want and desires v.s. responsibilities as well as dreams v.s. realities, and what people should do was be truthful to themselves and others.  If Millie had been truthful to Fitz early on, this probably would not have dragged on for so long.  At the same time, if Fitz had been honest with himself, he would not have tortured them all for so long.

I very much enjoyed this book as everything good overshadowed any problems I had with it.  And I cannot wait for The Luckiest Lady in London.