The Lotus Palace by Jeannie Lin 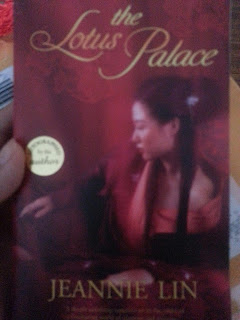 First off, a minor disclaimer: This was an ARC from the author.  I will purchase my own copy once it is out in stores.

Let me just say, this book actually had a lot of the type of tropes that I typically do not read.  Normally, I wouldn't even have pick it up, but I really liked Jeannie Lin's books so far and pestered her for an ARC.  Once I got it, even with some minor trepidation, I gave it a go...and oh my gosh, it was so good I couldn't stop until I finished... on a work night. In one go.  Then I re-read it again. My mouth was hanging open the whole time (the first time).

Jeannie Lin was a definitely brave author. I wanted to say adventurous but that's not exactly correct. Neither was brave. Maybe I should say this author was not afraid to back away from any topic. I applaud the author and really really applaud Harlequin for taking the risk.  I had to keep checking the cover to make sure it was Harlequin and it was.  I feel like I should write a letter to Harlequin just to thank them, but then I'd seem kind of creepy and weird, or fake.

Before I start the review, please be warned there will be spoilers.  I wanted to do a review like I did with the previous book, but I really couldn't even explain the characters without it.  There was too much mystery and background at every turn.  Even the background of both characters didn't really come forward until halfway through.  I will avoid most of the plot though and just focus on what I thought of the book.

The Lotus Palace by Jeannie Lin

Yue-Ying was a maid servant...but the heroine was a former prostitute. Not a courtesan where she got a choice, or only served high end clientele, not a one or two lover, not a virgin first day at the brothel. No, she was once a common poor-house brothel whore.  Poor house, not wealthy or exclusive! And get this: she sold by her parents at the age of 8 to a brothel procurer. Yeah. You read right, sold by her own birth parents when someone was trying to buy her sister for a brothel. They just went, well we another one and sold her. Wtf.  It took years but her sister finally found her and bought her freedom even though the sister was still in debt as courtesan. I mean, where was my omg button?  And I thought the last heroine was ground-breaking.

I don't know what to say about Yue Ying other than I love her.  Jeannie Lin's female characters were always so strong-minded, and strong in general.  They're realistic and approach problems realistically.  None of those rushing into problems and needing to get themselves rescued.

Bai Huang - The hero was an addict.  A gambling addict. Not those occasional gambles, no, he was a got-shived cuz of debt, beaten, cannot stop, real problem gambler addict.  He didn't get disowned and mended his ways, no. He was forced, repeatedly, by his family to try and stop but couldn't.  Kept going back. In many ways, Huang was a character trying to redeem himself and that made him so much more endearing (rather than just being a rake, which was another trope I'm not into).  He's by no means perfect, but he's trying to be better.

And you know what? I haven't even started talking about the plot. Holy cheese was this an intense novel. It was really good. And I still cannot believe Harlequin would've taken the risk. Good for them. I would say faith restored but part of it really was this author. Makes me want to buy more Harlequin. Lol.

The characters all felt real to me, even the secondary characters. Everyone had their own background and personalities.  The clashes and intention were very realistic.  Oh goshes, the ringer.  I really would not have picked this book up on my own if I had not read this author before because I do not read this level of angst.  This was quite angsty for me and I enjoyed every moment. Lol. Half the time, I felt I was watching the Asian wuxia/historical dramas that I loved growing up.
The overall story had was awesome.  Murder, mystery, family secrets (which I spoiled already, sorry).  My mind was just so wowed on just about every aspect.  The historical accuracy was to notch.  The author did incredible research (imho) and never once info-dumped in terms of the setting and the world-building. The characters were so realistic as were the various relationship and loyalties.  The world remained very grounded and didn't try to make it all mysterious or exotic, or oriental (my most hated word to describe a different culture).  The realities of the world and class system, the danger... there was so much angst and it really put me through the ringer.  I really didn't know how they would end up together.

The only "complaint" so to speak was the super fast resolution in like 2-3 pages.  It was very quick and very clean like the last few books, but it was a Harlequin book and that's how it tends to be.  Plus page count was limited.  It felt slightly rushed towards the end and in my opinion, had the author had more pages, she would've been able to expand upon everything much better.  Everything wrapped up so fast and quickly and that was good in its own way.  More like...I wanted to read more. Lol.

A minor thing in addition to the quick and clean resolution was there was a lot of telling rather than showing when it comes to certain aspects of the book. It had more to do with page count, again, in my opinion since this book took place in a span of time, which was much MUCH more realistic than the 1-2 love/conflict resolutions out there.  It made the changes Huang went through were realistic.  Each character was so real, no cookie cutter characters here.  And so intelligent.  Again, the idea of education worked so well in this book.  There's also scenes of writing...on the body. Hehehe.

There was a discussion about the HEA on Jeannie's blog. So, let me just add one more thing...quick resolution have been a bit of a thing I've seen in many books recently.  The opposite of that would be those semi-cliff hangers in series.  So, which would I rather have?  I'll take this kind of closure just fine because it was clean, concise and very realistic.  Hints were dropped throughout the book, although very subtle, it was believable.  The H/h's HEA was assured in my mind and not the type of stories where I think the two main characters would off each other in a few years like other books.

I must say though, my favorite was still My Fair Concubine. Although angst filled, it had less going on in terms of plots, subplots and mystery (mostly the mystery part) and it has more to do with personal preference.  I saw on her site there's a sequel coming... I'm so excited.

Also, I cannot wait until Jeannie Lin starts writing single novels with greater page-count because it will be coming at some point.  I just hope she'll explore both the intricate stories (like this one) as well as have some that are simple (like My Fair Concubine...yeah, you can tell, I like that book a lot).

Yeah, I meant to write a review and it just sounded like a lot of gushing on my end.  I think I need to re-read all three books and write an overall review.  Jeannie Lin's books all contain quite a few themes I found to be very sincere and powerful: love, family, duty, the powers of education, corruption, class, etc.  All these aspects were inter-linked, the history authentic and at no point was I given the impression of this world being a token mystical and exotic setting.  There was no preaching of specifics.  This really was an honest (complex) romance between two people.

If this book doesn't sound like for you, pick up one of her other ones.  Jeannie Lin's books have very solid foundation, but the stories also have a wide range of spectrum for everyone.  Book will be out August 27, 2013.
at 11:30 AM