Heart of Obsidian by Nalini Singh

Man oh man, where do I start?

It's a pretty well known fact that I very much obsessively love Ms. Nalini's work and had stalked met her before gushing with much appreciation for her work.

Unless you had been living in an underground bunker without internet connect or human contact for the last few years, the glorious Psy/Changeling series had been taking the world by fire very much lauded as a great series.  I, myself, am numbers in that groupie fan-base.  It doesn't take a genius to see how Ms. Nalini's a brilliant literary genius writings were very unique, thorough and fun to read.  I stalked followed her writings nonstop.

Sadly, I had not been feeling as connected with her last few books *hides in shame*.  After reading this book, and contemplating for quite some time (plus a few re-reading), I have finally understood why.  Ms. Nalini genius extraordinaire, brilliant genius, wrote wonderfully and beautifully as always.  This book was equally awesome as the rest of her series.  It was I whom changed and therefore my taste in books have altered.  Still, what an incredible book.

Heart of Obsidian by Nalini Singh 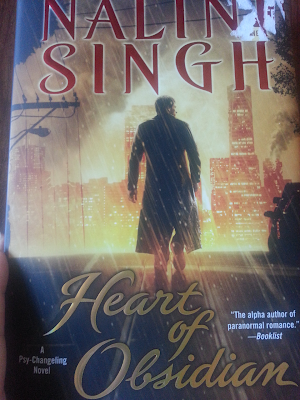 For those following the series, it should come as no surprise that Kaleb would be a walking, living hotness awesome character.  The most (seemingly) ruthless and young Psy Council, it was had to determine his allegiance.


The stakes for the Psy-Net wars (as I call it) continued to climb and the new alliances of previous books came more solidified.  The pure complexity of the overarching storyline would've driven most people nuts, but Ms. Nalini kept everything crystal clear.  I don't even have to remember the previous books to be able to follow the current events in the books.

As with always, the main storyline was still the relationship between our Sahara and Kaleb.  It was a good solid relationship.  I loved how it was built and my favorite FAVORITE parts were when they were younger.  Those flashbacks were so beautiful it brought tears to my eyes.  Then I would go back and re-read those parts only...over and over again.

We got an even more awesome heroine in Sahara.  Been tortured for 7 years and still came out whole.  That's just plain awesome.  The one think I especially loved and appreciated about Ms. Nalini's writing were her heroines.  The heroes were always wonderful and love and hot, but it was always the heroines that drew me in.  They have all gone through unimaginable situations and always came out stronger.  Damaged and shattered, but never for long.  They put themselves back together and become even stronger. Sahara doesn't cower, she doesn't go off and do stupid stuff to prove herself.  Instead, Sahara had a great grasp on herself even as she was unable to remember aspects of her life.  Despite all the torture, Sahara refused to remain beaten down and broken.  Which make Sahara and Kaleb's relationship all the more touching as she continued to try and help him heal even as she was healing herself.

As many have already predicted, Kaleb was the Ghost.
Also, he was not only the protege of the psychopath Santano Enrique, but also his biological son, was meant to be a shocker.  It really wasn't a big shock for me.  Why else would some psycho just pick a random high powered kid if he didn't have something vested in it, you know what I am saying?

Where I noticed my own problems...

This started with Hawke and Sienna's book...this idea of meeting your mate young and being able to determine their OTL (one true love).  Now, I finally realized it.  I've fallen off the wagon of insta-mate/love/soulmate.  It's funny since Hawke and Sienna's book was about finding love after loss of true mate and I ended up feeling it was the opposite.

The second part...which falls into this book with Kaleb and Sahara was the age they decided to be together.  Granted, it worked perfectly in this book's context and as I mentioned above, I much obsessively LOVED adored the parts of their youth together.  My discomfort were my own and nothing to do with this book.  I.E. My own prejudices jolted me out of my reading zone and I get caught up with the ideas rolling around in my head rather than let the book flow.  It also has not been limited to Ms. Nalini's books...just novels in general.

Also in line with this...just because people grew up together, spent their youth together, would the love continue to be unconditional in their adulthood.  Ok, in my own messed up way, I wanted to say that people grow and change differently.  The love of youth, no matter how deep and strong, would change once two people whom had lived and suffered apart even when they meet again.  It does not mean they cannot still fall in love together, but often youthful love would gain an idealized quality.

The couples idealized each other too much just because they were a certain way in their youth.  This theme really bothers me in general.  As Hawke just somehow knew at his tender age that his dead mate would've been perfect, or that Kaleb "emotions" for the young girl he knew somehow laid the burden of millions upon millions of lives onto her memories.  What if Sahara wasn't the awesome woman she survived to be?  What if Hawke's mate survived and turned out to be some bitchy skank in fit of rebellion for having some old dude having planned their live together without her having a say in it?  It's hard for me to swallow at times.  Plus as with Nathan's situation of "letting" his mate live her life before settling down because of her youth?  She didn't need anyone to "let" her do anything.  Let a girl make her own mistakes please.

Do you kind of get my drift?  I know that in Ms. Nalini's awesome capable hands, these would never happen and we get the brilliant stories we now have adored and obsessed admired.  It's really just my personal biases and I getting in the way of a good read.  Goodness knows I'll probably always love her writing, but more often then not, little things snap me out of a good read.

Like, we're reading about Kaleb's background angst and he said this:
"Men... aren't supposed to be raped." (158)

Neither are women. Or children.  Or animals....
So what's your point?  That somehow it's worst for a guy?  How about let's not suggest comparison and agree anything forced without consent despite gender, race, ethnicity or age equals horrendously wrong and bad?  Just saying.

That's just a very minor example and it didn't really take the enjoyment out of this book.  Merely gave me pauses all throughout which did disrupt the flow for me personally.  Anyways, overall - another awesome read by Ms. Nalini.  The writing was top notch, the characters were awesome and the stories captivating.

P.S.  I loved the interactions of young Kaleb and young Sahara.  I sometimes just re-read those parts.  :) 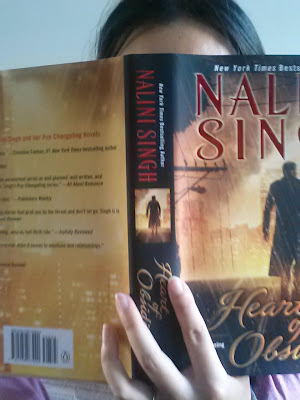