one dog and his boy by Eva Ibbotson

Back to the book reviews, while I obsessively watch stuff... -_- 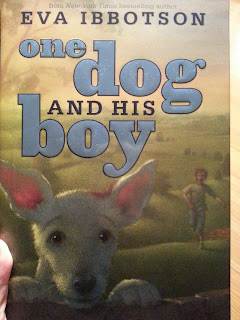 one dog and his boy by Eva Ibbotson
I discovered this book about the time Eva Ibbotson passed away.  This was her last book.  It was also around the time my dogs passed away and I was in a terrible reading slump that lasted a really really long time.  This book was adorable.  Just plain adorable.  I was definitely a fun read, minus one which I will get to later on.
All Hal had ever wanted was a dog. "Never!" cries his mother. "Think of the mess, the scratch-marks, the puddles on the floor." But on the morning of Hal's 10th birthday, the unbelievable happens. He's allowed to choose a dog at Easy Pets, a rent-a-pet agency (a fact his parents keep from him). The moment he sees the odd-looking terrier, he knows he's found a friend for life. But no one tells Hal that Fleck must be returned. When Hal wakes up on Monday morning, Fleck is gone. If dog and boy are to stay together they'll have to run away...


The story was simple enough, although rather unbelievable.  A young boy really really wants a dog, but instead of getting him a dog, his wealthy parents found this place that rents out dogs and rented him a dog.  Without telling him the dog was rented.  Yeah.  The dog was returned and the boy devised to take back his dog and the two ran away, with a group of rag-tag friends/dogs along the way.
It's a simple story of love between a person and a dog.  As with classic Eva Ibbotson, even the secondary characters were fun to read and had their own unique characteristics.  There were no "real" antagonists, except maybe four people and their motivations were greed.  Overall, it showed the incredibly deep and strong connections between a dog and his/her guardian. I loved the dedication and the fact so many points of views were used.  Everyone had their perspective on how things were and other than the two antagonists that were renting out the dogs (and the "kidnappers" so to speak), everyone made decisions that weren't exactly mean or cruel, but only what they felt was best.

Ok, the only problem I had was the classification of certain dogs, like pitbulls and stuff...meaning, their personality traits were assigned to their breed.  To me, dog lover and animal advocate that I am, was a type of -ism... All animals were no more one specific type than another.  Normally, I would easily overlook these shortcuts to characteristic except the author put in the idea of pitpulls and such type of dogs as inherently blood thirsty and vicious.  No.  Just no.  They are a physically strong breed and the terrier aspect of them were like all terriers, very very active, but they are in no way blood thirsty.  That's humans.  So, this made the enjoyment go down quite a lot.  Granted, the story did try to show that they're not completely bad, but that bit already put my face into a frown.
Another secondary issue that kind of made me notice was actually pretty nicely dealt with, about wealth (or lack of).  As much as I felt bad for the Hal and loved how he and Fleck loved each other, it's kind of hard to feel bad for a young boy who really lived a pretty good life.  I felt terrible for Fleck, for Pippa and her family, but I'm glad it was addressed to see the disparity.  It ended nicely though, with every dog finding a great family.  Pippa's family got a surprised and definitely welcomed help from Hal's dad.   So very Eva Ibbotson.  I am definitely going to miss her writings.
A definitely fun read.
at 7:00 AM