Rebbeca Barnhouse - Coming of the Dragon and Peaceweaver 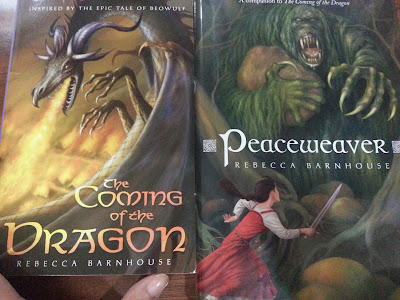 Coming of the Dragon
Above a farm, a black shape rent the sky. Like a dark ribbon blowing in a breeze, it undulated through the air, then straightened and shot toward the farmhouse. Fire streaked from it. The thatched roof blazed in sudden flames, and two tiny figures raced from the door. The thing wheeled and turned, beating heavy wings and retching forth more fire. Both figures fell.

Rune’s body turned to ice. It was the worst thing he could imagine. A dragon. Someone had awoken a dragon.

In this stand-alone companion book to The Coming of the Dragon, 16-year-old Hild has to decide what’s most important to her, honor or happiness. Those who have read Dragon will meet new characters and see some familiar faces from a new perspective. Readers new to Hild’s world will meet a girl who knows how to wield a sword, but whose job is to weave peace between two warring kingdoms.

Coming of the Dragon was based on the latter half of Beuwolf/Grendel.

Let me say this, I was very much surprised by both books.  I expected to be so-so with The Coming of the Dragon given that it was a first person narrative of a young male, where as Peaceweaver was a third person narrative of a young female.  Well, I ended up like the Coming of the Dragon much better than Peaceweaver.  They were kind of companion novels to each other.

Both books were a coming of age type of story, with the second being a partial journey story.  The two protagonists only met at the end of both books and even then, judging on how they thought of the other also influenced my opinion of the stories and characters.  The world building for both books were very solid.

Coming of the Dragon, Rune - our growing hero, felt stronger in terms of character growth. The changes and development was very believable.  It was tense and exciting.  I loved the various layers of background and depth.   Although in first person, it never felt like there was much info dumping.  The stories were told very organically and Rune's observations were very realistic.  He even comments on his own changes (or lack of).  His losses were painful to witness and hard to endure, but at the same time, you cannot help but cheer him on.

Peaceweaver's character, Hilt - the accused witch of the royal family, started as a great and interesting character, but kind of driveled off.  Her character growth was way too fast and abrupt throughout the book and then almost disjointed, especially towards the end.  Maybe it was the timing, something I can't quite put my finger on, I felt the ending was so abrupt I didn't really believe the changes at all.  Which was a shame, since I really wanted to like this story (given how much I enjoyed Coming of the Dragon).

The timelines for both books were concurrent.  I found it fun to contrast both characters perspectives of the same event and how different they truly were.  At the same time, since I read Rune's book first, I felt a little peeved at Hilt's observations about their situation.


While Rune raised himself from humble means, even as he was used and abused, he maintained this strength and quality...ergo, he was able to be king.  Even as he doubted his own capabilities, he was able endure and lead.  The example was the Peaceweaving marriage at the end.  As Rune was trying to rebuild their homes, fight off internal conflict, and deal with border warfare, he still looked at things optomistically.

In contrast,  Hilt felt like she stayed a teenager the entire time and never really grew up.  It was very tough on her as well given that she actually grew up in a good environment and then got accused then lost everything.  It's not that she was acting out of character, but I really didn't felt like she really grew up at all. Even at the end, her change was just too abrupt since I felt she didn't grow at all throughout her journey.  She went from, "I'm going to trick them, escape, marry someone I hate and hope my family will take me back" to "I'll stay with this puny (our previous hero) guy and see what happens."

If it wasn't for our hero Rune, I really foresee doom for them all.

As much as I enjoyed both books, I ended up liking Coming of the Dragon better.   A definite fun read.
at 7:00 AM