Update: My apologies for the blogging errors.  I was using my phone to set this one and it published wrong. 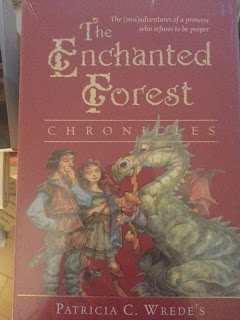 If you have not read the Enchanted Forest Chronicles, you really should.  I actually didn't read it until the late 90's which was just fine except I read them in the order it was meant to be read, instead of the way they were published.
By Patricia Wrede

Talking to Dragons was published first and it probably would've been better had I read it first. It would've been exactly how I'd been hoping for a lot of other novels I read (wanting prequels).

Let me just say this, Talking to Dragons was probably my least favorite because I had read it last. 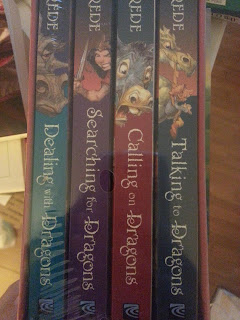 Dealing with Dragons (1990)
In which Princess Cimorene of the kingdom of Linderwall decides that being a princess is too boring and confining, leaves home to work for the dragon Kazul, and discovers and subsequently dissolves a plot by the wizards to take control of the King of the Dragons.

This book was my first introduction to the wonderful world of the Enchanted Forest and I was addicted.  I absolutely loved and adored Kazul, the dragon that takes in Princess Cimorene as a cook.  It was interesting how Dragon world was organized and classified, a definite breath of fresh air in many aspects.  I wouldn't say that it turned the usual dragon-knight-princess story on it's head, but I loved the new take on everything.  It was funny and different from the over abundance of the damsels in distress.

When I first read this book, it blew me away with happiness. Goodbye creepy angst, hello characters that took care of themselves and each other.  For this book, I also adored the fact the romance was less of a focus for our heroine/protagonist.  Also, the secondary characters were so engaging.  Actually, I loved all the side characters. The best part was that the book ended with Cimorene staying as chef.  Just adorable. Ps. Wizards are the villians because they do not have magic so they steal it! Oh! And they melt.

When I read this book I was quite surprised that Mendanbar (our new protagonist) was our introduction to this world again. Given how much I adored Cimorene and Kazul, I was quite sad they were not our POV. After I got back into the story it was of course great fun.  Even thought this book fell more in line with fantasy stories, it was still incredibly unique. It ends on a happy note of the two falling in love and getting married, but instead of any of the usual drama,  the two simply state it with such logic and common sense.

I missed some of the old secondary characters but lived the new ones equally. The myster was fun (although not hard to guess) and I still adores this world.

Calling on Dragons (1993)
In which Morwen discovers that the wizards have stolen Mendanbar's sword, which kept them from stealing the Enchanted Forest's magic, and works with Cimorene to retrieve it.
I actually am really conflicted about this book since although I really adored Morwen as was one of my favorite characters, story-wise, I was not blown away at all.

To tell you the truth, I was more or less annoyed with the direction it went. As much as the book still allowed me to live the wonderful world of the enchanted forest, the mystery and the drama was not appreciated. Granted, I understood the point of this book was to set is
the final book, which therein lies the problem. It was merely building up to the final book and that was just annoying.  Its my personal opinion of course and it doesn't change the fact I very much adored all the individual characters. It just felt so much less than cool than the previous two... like it was a more normal novel.

Talking to Dragons (1985, revised 1995)
In which Daystar, Cimorene and Mendanbar's son, is sent off into the forest with his father's sword and no knowledge of his heritage. Written and published first, and then revised later to better fit with the prequel books.

Probably my least favorite, sadly, as I didn't quite connect with Daystar. I also thunderstood that the author wrote this book first and after the other three book came back and updated it.  Maybe if I had read it first I would have enjoyed it better, but not only did it have first person narrative (which I am inclined to look at with a harsher and critical eye) this book also felt more like the usual children's fantasy book very common out there.  Even our fire witch wasn't as awesome and that was a disappointment.

Overall, if you haven't already, go ahead and read this series. The good will definitely outway any problems.
at 8:00 AM