I am currently on RICE due to a late night accident down the stairs.  The result of carelessly hurrying down the stairs in the late midnight hours, without lights, and without the glasses desperately needed by a nearly blind as a bat person.


The pain was so knife-stabbingly intense, I was surprised I was still alive. Hahaha. There was a lot of crying involved. For the few hours where frozen packets of corn and peas were used as comes on the baseball sized swelling on my ankle, it was coupled with a lot of shaking and sweating before we finally decided to go to the hospital. It was just a heck of a sprain the side of a baseball.

I've had sprained ankles before, but it has never been this bad or painful. It was time to face the truth, i got fat therefore my ankles were unable to support my increasing size. Hehehe, ok, maybe not that. It just mademe realize I am not as young as I used to be and my body doesn't recover as fast.

While being unable to do anything might seem like a great opportunity to write, two things stop me:
1) The need to do normal things take longer, ie. going to the bathroom, getting a drink of water...general hobbling.
2) Lack of actual writing. Hahaha.

I tried to write, but it was so hard to even get into a physical position to write. Sitting up hurts, laying down was the only position that has the least amount of pain, given that I did not move a cm.  I couldn't even lay on my side.  For the most part, I slept through out the day. I would like to say due to boredom and rest but it was more of a combination from pain, exhaustion and stress. 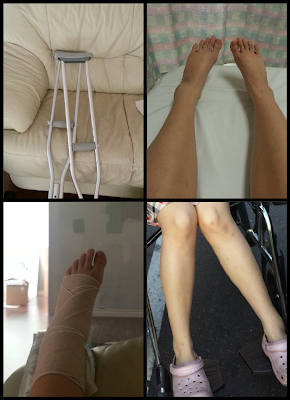 (healing foot)
I would post a pic of the actual damage, but it looks bad.  Hubby was having fun taking photos, the meanie, but he has been doing his best to take good care of me.
So, my apologies if my posts this month are going to be even less than I anticipated.  When it takes double to triple the time to move from one place to the next, getting to my computer and staying in a type-able position actually causes pain - forming any kind of cohesive sentence is rather miraculous.  My spelling went from bad to horrendous. Thank goodness for spellcheck. Lol.
Okie dokie.  Back to resting. ﻿
at 8:08 AM