I actually read this book a long time ago and thought about reviewing it for quite some time. Sadly every time I tried form coherent words of praise it always end up sounding like some five year old on a candy high raging about how awesome said candy was and that everyone must have a taste of such sweet forbidden drug.
Well let us try again... 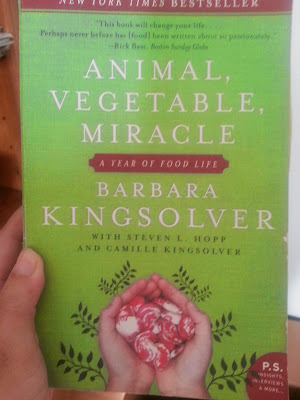 When I first encountered this book, I was at a very sad time I'm my life. More than a slump, the joys in life has faded into nothing more than the barren whiteness of the ever coming ice age.  No creature or power could deny the unyielding forces of the chaotic universe.
But as with all weeds that found a way to survive, this book was much a force in planning that seed to resist the forces of nature to silence and bury its existence.  Much like the ever evolving environment, at that time it was the perfect distraction. Sort of...

When my dogs were around, they had been my main priority and focus. Well aside from survival and whatnot.  As much as I enjoyed flowers and plants as a little kid, taking care of the dogs and watching what they can or cannot eat overtook any desire for planting things.  Plus, much of the things I wanted to plant would've needed to be referenced with what are dangerous to dogs.  Hint: a lot.

I always enjoyed Barbara Kingsolver ever since reading Animal Dreams in High School.  Although I continued to follow her books every now and then, it was often just for pleasure and most of the plot forgotten soon after.  This was where this book made the departure.  It very much effectively stuck itself into my brain and I couldn't get rid of it.  I carried the book around where ever I went for like a year.

Part of it was the honest way everything was written and part of it was just something I had always been interested in.  Barbara Kingsolver and her family spent a year pretty much "practicing what they preach" so to speak.  For a year, they would only eat locally grown food and those that they can grow themselves - meat included.  It sounded like such a challenge, but the way it was written showed how simple it can be sometimes.  Something as simple of going to the local's farmers market, or eating seasonally (buying only the food that's in season).  This book was very good at simplifying and demystifying a lot of experiences that now seemed completely foreign when it was something everyone did less than a few decades ago.

It got me started on gardening, like actual gardening instead of just buying already grown pots and watering them.  I fell in love with seed catalogues and growing everything from seeds.  Everyday was fun and it helped me get out of the house more.  This renewal of gardening activity also helped give my family and I something to talk about.  Even living in the city for the past few decades, my parents and grandparents always continued to grow things.  Whether fruit trees, vegetables or sunflowers (I got everyone addicted to that), it was family-filled fun.  We gave each other seeds and food, or swapped stories about how to plant things.  I am now sometimes the seed provider. :D

I have a great love of organic, heirloom, or even simply unique plants.  It's very relaxing.  I need relaxing.  I'm getting my family into that too, although they're more happy to just plant what they like.  A quickie about sunflowers - they are my favorite flowers and one of the easiest to grow.  That's where I started and that's how I got addicted.  Now my whole family grows them every year. :)

Another aspect I really like about the book was the breakdown of eating whatever we want whenever we want.  I was very lucky to grow up in a family where food was a major source of importance (as with all Asians, hahaha).  We like to eat good food, the best if we can afford it.  At the same time, expensive doesn't mean good.  Quality was what mattered, so eating seasonally was something of a norm for me.  Eating things out of season, everyone in the family could easily taste the blandness or if something was off.  Thus, fruits and veggies were a complete norm.  I never understood my friend that only ate meat and professed to puke and bodily reject and veggies.  My responses was they haven't tasted real good food.

The same goes for meat.  A lot of my friends laugh and sometimes look down upon the fact I'm willing to spend more on stuff like "free-range," "wild," or "sustainable."  All of it goes down to the animals.  I personally believe ever animal deserves dignity, thus, I want the animals to live happy and healthy lives before I eat them.  I appreciate and respect their sacrifice so that I may survive.  It's only normal for me to also make sure they lived a good life prior.  Ethics and legalities aside, my reasoning was simple:  if the chicken I eat has been pumped full of medicine, lived in horrible conditions and had a stressful like, I am consuming everything and more, instead, the healthier the chicken, the healthier I will be by eating it.  It's a simple cycle.

And yes, I can taste the difference.  I really can.  I wish I didn't since it'll make buying food a lot easier, but a lot of times, I can taste when a piece of chicken or beef (no matter how well cooked) tastes off.  It's terrible.  One thing the book helped me become aware was a lot of these very issues, as well as a fun new one - local food.  I am trying to eat more food that's grown and raised locally.  It'll help the environment. :)  I know, treehugger that I am.  Although truthfully, I rarely hugged trees.  I like to climb them. ;)

One very important thing I just have to point out though, against what this book said: milk.  I love milk as much as the next person, but one aspect of the book bothered me.  Kingsolver reasoned that if we don't milk the cows, then the cows will suffer and even die from the bad milk in their body.  Let me say something and get it off my chest: COWS ONLY PRODUCE MILK BECAUSE THEY GAVE BIRTH.  If we don't steal and kill the calves that need the milk, then we won't have problems with cows crying when their udder hurts from bad milk.  Stop stealing another mammals milk, weirdo.  That aside, I know there are small farms that don't steal the calves and instead, rotate out the milk so that there's enough milk to be sold and enough for the babies.

Barbara Kingsolver is a great storyteller.  You don't be bored reading this for sure.  It also was fascinating to see the different perspectives of her daughters and well as husband.  Plus, after this book, I love turkeys.  They're adorable.  I grew up with chickens so I always loved them, but after this...I love turkeys.  And bees.

Other than that, I'm good.  Lol.  Please read this book if you're even slightly curious about growing food for self consumption.  Or if you're bored and want a gardening book.  You can even borrow it at your local library. ;)