Sold to the Enemy by Sarah Morgan 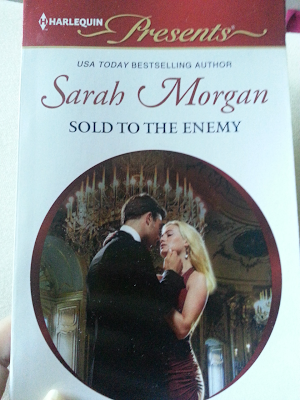 I have no problems with category romances, I actaully quite enjoy them except the crazy titles. Seriously, this title does nothing to describe the book at all. Nothing. Its actually more confusing. Maybe something like 'Into the Billionaire (cuz millionaires don't cut it) Enemy's Embrace' would work more. Or even, 'Bargain with the Billionaire' but these titles would be considered too short. Doesn't really matter though, since the story was fun.

Sold to the Enemy by Sarah Morgan

This author was just always good at writing these stories. Once again, she writes great female protagonists. I really liked Selene Antaxos. She was smart, sweet, strong and independent. These should be the type characteristics that should be used as models out there. Her inexperience was understandable because it was based on her upbringing thus made her more realistic. At the same time, Selene was intelligent and strong enough to take care of herself (and her mother).

My favorite aspect about this character was the fact Selene confronted her problems instead of resorting to any tstl actions. Selene did not change due to the overwhelming and overbearing male protagonist. She often outsmarted him, or at least was one step ahead of him (in terms of feelings and reading his feelingsO, ergo no tstl situations. Lol. Selene was realistic and she was very true to herself. Ok, enough of my gushing.

Stefan Ziakas, our other protagonist, was a good character too. Ms. Morgan always wrote a human male character, with just the right amount of alpha ego and attitude without being the typical abusive sociopaths out there. He wasn't those broken types that lashed out every chance he was vulnerable, although he would go cold every so often. He actually behaved like a mature adult for the most part even as Selene challenged and stood up to him against what she saw was inappropriate behavior.


Overall, the story was simple and very enjoyable. It focused on the story of two people and how they each overcame the trauma of the hurt caused by their families. Well, in this case it was more blamed upon Selene's abusive father. All in all, Ms. Morgan's books tends to be auto buy these days when I want some nice character (where I would actually offered to be friends with if they were real period) driven romance.
at 8:00 AM