Still in the mend

Ok, it has been over 4 weeks. What the heck is wrong with this foot?

Already went to like 3 doctors, 4 if we count the urgent care doctor. According to the old man, the specialist we finally went to see didn't even think this was worth his attention. In the last doc's defense, it really wasn't his attention. The guy's an ortho surgeon for goodness sake, no need to bug him with a sprain (even if he gets paid). Sadly, his advice that using my foot more would help reduce the swelling due to blood circulation seemed to have the opposite effect at the moment. 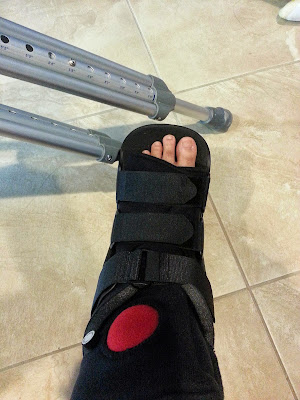 The boot, although immensely helpful in assisting me to finally be able to move around on my own, also has the unfortunate side effect of covering the entire foot up to my shins. Thus, I had no idea how badly the ankle and foot has swelled up until I was no longer able to bend to any amount of angle.  It's literally unbendable due to swelling.  Gah....

Still, I really appreciated my general doctor for recommending just to be safe. I liked her suggestion for more elevation so I shall.  She's so nice.  Lucky me, I had been following up with my acupuncture doctor (also had MD you nonbelievers) and he has also been wonderful with food suggestions as well as dealing with my back.  Yes, on top of the foot, my arms, shoulders and hands have all been having some problems due to the crutches.  Now with the boot, I have been unable to find any other shoe (aside from heels - which would be a very BAD idea) for my right foot to balance.  So my back has been having problems.   Thank goodness for health insurance right? All these doctors would've wiped me out completely by now, well, maybe sometime soon. I will see how bad the damage once the bills all come in. Sometimes this was way we stuck to horrible dead end life sucking jobs; good health insurance.  Or, just health insurance.  God, US healthcare company and system sucks ass.


The downside if my recent injury,  besides the obvious lack of independence, limited mobility, financial burden and general brain atrophy - I mean mental stimulation,  I really miss going to volunteer. 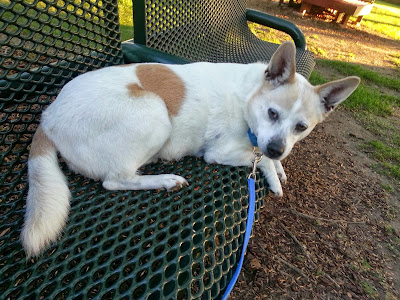 I was going to adopt this baby girl but I was happy to hear she has been adopted in my absence.
I love dogs, I really do.  Sadly, this foot also revealed how much we shouldn't have a dog right now.

We can barely take care of this family of two when one was down for the count, the poor doggy would've been suffering in silence.  I still want a dog though.

In the meantime, I want to get some books and get this blog up and going again.  It's just really hard to type and my phone keeps giving me weird typos.  Yes, I do realize a lot of the wrong usage of words after posting, but it's so hard to edit on a cellphone.  I just tell myself to be happy I'm posting anything.

Oh oh, plus NaNoWriMo will be just around the corner.  I'm getting ready. :D
at 9:00 AM